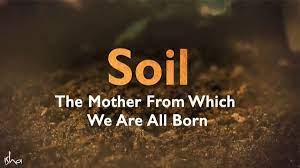 …We are all, for a certain while, not soil, and the best research we have on decomposition comes from body farms. The atoms that make up our bodies were once, and will be again, the land that grows things. Everything that we are now has been cycled through soil, whether we’re Buddhist or atheist, cremated or buried, Sudanese or Scottish. All that carbon, oxygen, nitrogen, hydrogen, calcium – it all came from somewhere, and it has all been in this cyclic loop for millions upon millions of years.

Soil: the incredible story of what keeps the earth, and us, healthy,  by Matthew Evans (ABC Books, 2021), is a book that deserves to be essential reading for every high school student and their parents.  In the second of two Blogworthy posts we include short extracts that will give readers an idea of just how important soil is.  When we visit the plant communities living at Munibung Hill we are the beneficiaries of the work they are quietly doing everyday just as they have done for yonks.  Making their own food, providing food and shelter for other species and generally going about their business without drawing attention to themselves. They are masters at making connections via their fungi friend networks.  When next we partake of a good meal, let’s be thankful for soil and the role Munibung Hill plays in our lives.  Here is the second of the two parts …

It’s far easier to imagine an ecosystem above the ground than below, with plants, small mammals, lizards, birds and insects all coexisting in the geography and watercourses that support it. There are herbivores and omnivores and carnivores, a million connections.

Below ground, the ecosystem is way more complex, thanks to more species, and a three-dimensional living space. But it, too, has herbivores, omnivores and carnivores, as well as a host of other really cool and complicated interactions. The problem is, it’s unseen – and until relatively recently, unseeable and unknowable.

While leaps have been made in our understanding of microbes, plant growth, of nutrition and all the complicated chemical interactions, there’s still a lot that we don’t yet know. (Page 47)

Ultimately, I was wrong: plants don’t eat dirt. What I first heard of from Letitia, and then from countless other sources, is that up to 90 per cent of what a plant needs from soil comes through the action of microbes. Microbes make it happen. They communicate, somehow, with the plant about what the plant wants; the microbes then source it, transport it, and make it available in a form the plant can use.

Despite comprising less than 1 per cent of soil mass, it is soil microbes that actually matter when it comes to what a plant can, and will, get to eat, after that initial sugar rush from photosynthesis.

Plants and soil can only coexist. Like us, plants came into a world dominated by microbes, and evolved in their presence. Multiple complex interactions can be hard to understand. Yes, we can grow plants in places where the soil is negligible. Or even in water that we add nutrients to, as in hydroponics. But we need to have the humility to recognize that this is not how nature makes the best food for us to eat, and that just because we can’t quantify all the different microbial interactions between plant and soil, doesn’t mean they’re not happening, or that they’re not important. The result of ignoring soil life is inevitably to produce more hollow plants. We have created plants that are shadows of their possible selves, in terms of the complexity of their makeup. The resilience in their being, and the vitality of elements and molecules that they could, and probably should, be hosting. (Page 49)  [ Note: Letitia Ware is a soil scientist and garlic farmer, who was an advisor to Matthew Evans]

Actinomycetes are also one reason soil can smell so good. That earthy, musky scent of freshly exposed soil comes from metabolic end products called geosmins that originate in actinomycetes and other soil microbes. If you’ve ever picked up a handful of healthy soil and smelled the glorious aroma, almost been tempted to taste it, that’s geosmin. Geosmins give the earthy taste to some vegetables, too, such as beetroot – and the human nose can pick them up at levels of about five parts per trillion. That’s right, FIVE PARTS PER TRILLION! Pretty cool, hey? (By comparison, hydrogen sulphide – rotten egg gas – can only be detected in parts per billion.)

Petrichor, the wonderful, soul-filling smell you get after rain on earth, is thanks in large part to the metabolites of soil life. To geosmins. (Page 55 – in Chapter 5 Here, There and Everywhere: the ‘Old Friends’ Hypothesis)

Most changes to crops have benefited producers, very few the eaters. Cultivars that respond well to high nitrogen and don’t require a complex underground ecosystem have all been developed to benefit those who aren’t eating the harvest.

A farmer gets paid for crops based on a few things. Most important is weight; the bigger the better so crops are selected for that. Fruit and vegetables must also look good, and be able to be transported and stored without losing too much visible condition. And growers have to complete on price.

Nowhere, in our current agricultural system, is there any motivation to grow nutrient-dense food. That’s a major reason why we’ve gone down the dilution/poor cultivar/lifeless soil pathway for so long. Hence our recent success in growing the least nutrient-dense food in human history. (Page 74 in Chapter 6 Look After the Soil, and the Plants Look After Us)

What is true of grapes is true of all food. Flavour is a reflection of nutrient density, the best indicator we have of soil health when we ingest our food. Yes, cultivars matter. Not all cauliflower cultivars are created equal, and not all are good in every growing region. And seasons also have a strong influence on flavour, and hence nutrient density. That’s hardly news to a home gardener, finding that a hot spell makes your radishes spicier, or a cool snap might lead to less aromatic strawberries. But the important thing to remember is that soil health is also vital for the best-tasting food, and the food that is best for you.

As we’ve seen; if you look after the soil, the plants will look after you.

Much of the complex new science is pointing to this thing that good growers have known for ever. Something that makes sense, and that we as a species are clearly designed for. Our noses and our bodies are built to work in tandem to find, cherish and use the foods that provide us with the best nutritional benefit.

It’s really not along leap from soil health, to plant health to human health. (Page 84 in Chapter 7 Nutritional Dark Matter)

Put simply, bare earth is bad. Plants try to cover bare earth, and bare soil wants to be covered. Water and wind can do little to disturb the topsoil when there’s a verdant mat of greenery protecting it.

In the big scheme of things, cutting down a clump of trees is the worst thing you can do for soil. A good old forest doesn’t really suffer much erosion compared to open ground. And if you cut down a forest you immediately speed up the rate at which water can impact soil. Like mini missiles, the water droplets from rain loosen soil with each strike, hitting the ground at up to 30 kilometres an hour (20 miles/hr).

In a forest, there’s a buffer. A tree’s leaves slow the raindrops down. Then there’s the other things a tree provides, like leaf and bark litter on the ground to protect against raindrops, and drips from its own leaves and branches. Trees also provide stability to the soil through their roots.

Once the forest is gone, all the roots die, carbon is lost, and life diminishes in the soil for a while. The raindrops can damage any bare earth, and as they rapidly fall together in a storm or heavy rain, there’s the rush of water downhill.

The next worst thing when it comes to erosion, after cutting down an existing forest, is digging the soil. This exposes bare earth to the effects of rain, and to wind erosion. The problem is, growing food, particularly vegetables, often produces bare, dry earth. (Page 94 in Chapter 8 Here Today, Gone Tomorrow)

(Chapter 9 Big Ones, Small Ones, Skinny Ones, Fat Ones: Worms)

Aporrectodea longa tunnels up to a metre down, leaving soil more fertile, moving nutrients and making them more plant available. They’re generally considered a heavy lifter in the worm stakes.

…We are all, for a certain while, not soil, and the best research we have on decomposition comes from body farms. The atoms that make up our bodies were once, and will be again, the land that grows things. Everything that we are now has been cycled through soil, whether we’re Buddhist or atheist, cremated or buried, Sudanese or Scottish. All that carbon, oxygen, nitrogen, hydrogen, calcium – it all came from somewhere, and it has all been in this cyclic loop for millions upon millions of years. (Page 189 in Chapter 18 We Are All, Temporarily, Not Soil)