European settlement has not only devastated indigenous peoples culture, it has also devastated many plant and animal species. While European settlement has in one respect been a win, the Australian landscape has sadly been the loser, and by extension with the benefit of hindsight / insight we are losers as well. Time for some serious corrective action. The need for rewilding vast areas of Australia is finally getting some attention.  But it will need to be a two pronged approach, reintroducing native species while at the same time, or even perhaps before hand, ridding landscapes of introduced species such as cats and foxes.  The Federal government is slowly beginning to understand this.

Macca:  We love our cats and dogs but oh can we please be more responsible carers of these animals. In my local area, the dog poo is everywhere.  A lot of people clean up after them, but a lot don’t and then there are some who scoop up the poo into a plastic bag and then proceed to hoik the bag into the bush – it’s ridiculous.  What do we do about this kind of behaviour?

Sussan Ley, Federal Minister for the Environment rang in to AAO, to talk about a rewilding project in the Southern York Peninsula region, South Australia.

Susan Ley – We have a rewilding project where we have released 40 brush tailed Bettongs, a little rat like kangaroo – marsupial – into Southern York Peninsula.  There’s a 25 kilometre long fence keeping out ferals and bringing back Bettongs, followed by the Quolls, the Barn Owls, the phascogales (small possum like mammals, see picture at right) and the native ecosystem. 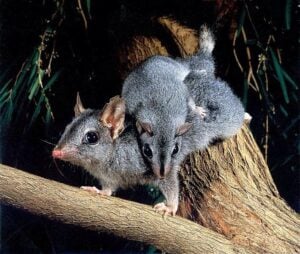 Things that attack all these animals are cats, they’re not native, they’re feral, they are out there in the environment – I call it the million paws walk (Ed note:> not to be confused with the RSPCA Million Paws Walk fundraising campaign)  every night they kill over a million individual wildlife animals, so our little marsupials, our little mammals are getting lost over the years and that why it’s a lovely story, when times are tough to actually be bringing back  Bettongs, which are quite incredibly cute but, most important we’re rewilding a huge area as part of our Safe Havens Project, where we keep these areas free from feral pests.

Sussan Ley – Certainly through COVID people are finding their way back to nature – it’s incredibly calming, it’s incredibly peaceful and we are hearing from the people who manage our national parks that they’re getting visitors that have never been there, that are desperate to find out what Australia has to offer.  They’re not going overseas, they lead substantially urban lives and reconnecting with nature, so it really is one the upsides (to the COVID situation).

Sussan Ley – That’s absolutely right. The natural world doesn’t need us, but we need it.

Sussan Ley – It’s important that we don’t talk about nature by locking it up, but allowing public access, by working with the community.  This project (i.e. Southern York Peninsula) has been years in the making, but it includes everyone, especially the farmers, and other community members.  While these animals are incredibly cute, they’re also incredibly popular prey for feral cats, so this is my appeal to people with cats.  Know where your cat is at night, particularly if you’re near the bush or near a reserve even close to the city.

For a transcript of the interview click on the link: Minister Ley interview, Ian McNamara ABC Australia All Over

Related to this story is the news that a city council is introducing a cat curfew, and other measures such as cat containment are now on the agenda in a bid to curb the devastating impact of feral and wandering domestic cats, on native wildlife.

A Victorian city council has made international headlines for passing a 24 hour ‘cat curfew’ in their area, with opponents accusing them of “tearing away basic freedoms” from their beloved cat population. But, several municipalities around the country have similar cat bans, many have had night-time ‘cat curfews’ for years, and, a parliamentary inquiry recently recommended a ‘national cat curfew’ to protect native wildlife. So, would you ever want either a cat ban or a ‘cat curfew’ introduced in your area?

Guests: Professor Sarah Legge, University of Queensland expert on the impact of cats on Australian Wildlife and Deputy Director of the Threatened Species Recovery Hub of the Australian Government’s National Environmental Science Program, and Mark Verbaken, Manager of Environment and Community Protection, Wodonga City Council, VIC, where they’ve had a cat curfew for nearly 20 years

More recently the NSW Govt has launched a program to stop pet cats from killing wildlife (ABC News 3 September 2021) with this film clip (Duration: 01:48 ) with the NSW Minister for the Environment, Matt Keen, stating that: Around 230 million native animals fall prey to pet cats each year. The New South Wales Government is launching a new education program to help cat owners keep their kitties off the streets.

Longing to belong. Is there really a substitute for our earthly belonging?

More than ever biodiversity matters – Report