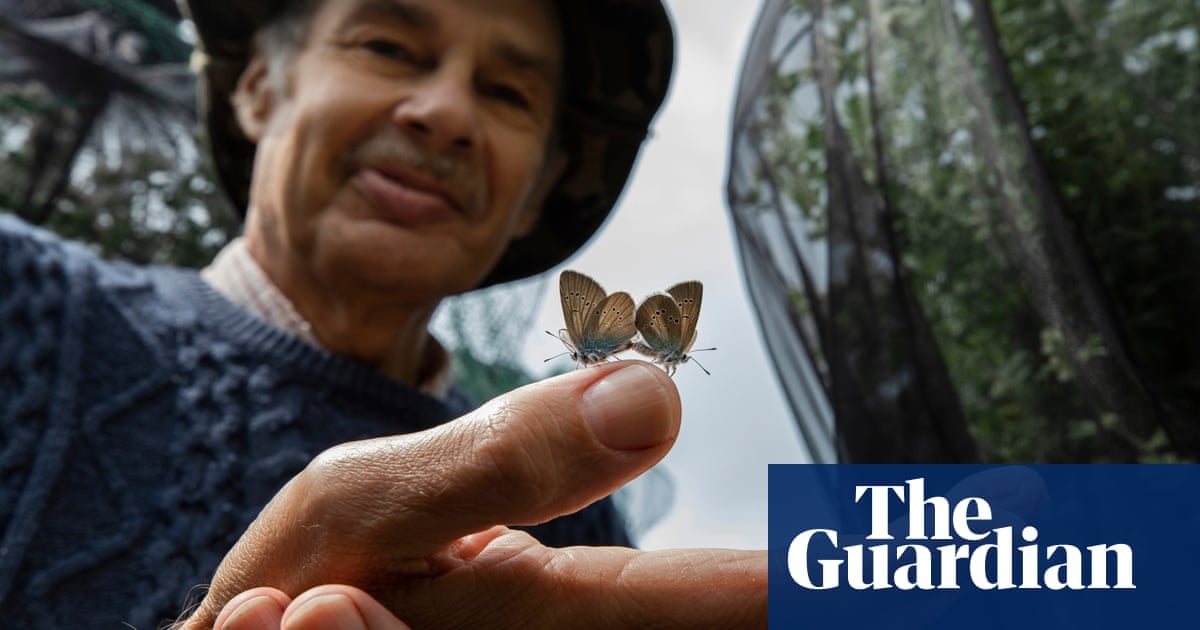 When we think of the tide, we think of water lapping on the shore.  We think of the ebb and flow – the going out and the coming in.  But another way of thinking about the tide is to relate it to the species coming and going, except that right now the tide of species going out is not being counter balanced by another wave bringing them back in.

In: How maverick rewilders are trying to turn back the tide of extinction, (The Guardian, Tue 13 Oct 2020), Patrick Barkham, tells how a handful of exceptional nature lovers are secretly breeding endangered species and releasing them into the wild. Many are prepared to break the law and risk the fury of the scientific establishment to save the animals they love. This story is set in the UK and the USA.  Could it happen in Australia? Considering the appalling loss of native species since European settlement, rewilding could help some species teetering on the brink.

In a beautiful meadow filled with wildflowers and birdsong, a man of late middle age wearing a faded camouflage sun hat knelt beside a clump of clover and prepared to break the law. Martin White removed a carrier bag from his battered rucksack and began quickly opening the lids of dozens of matchbox-sized pots. As he shook each pot, a flake of brilliant blue fluttered free. Over the course of about five minutes, White released 72 mazarine blues, a small butterfly named after the striking colour used in 17th-century porcelain. For the first time in more than a century, this rare insect took to the skies of Britain.

One by one, the butterflies spread out on the pink clover. Some flashed silver-blue as they zigzagged across the meadow. White watched closely. A darker-coloured female curled its abdomen around a clover flower. “She’s dossing an egg off,” he murmured. The butterfly placed tiny white pinheads inside the flower. Satisfaction spread across White’s face for a second. Then he scanned the dark woods beyond the meadow.

“I’d be worried if someone came out of there,” he said, pointing to the distant trees. “But I’d pick up my bag, amble off, and they probably wouldn’t notice a thing.” It was against the law to release a species here, an area designated as a site of special scientific interest. What if White was caught and prosecuted? “There would be an immense public outcry,” he told me in his blunt Nottinghamshire accent. “I would be an instant martyr, and that’s the last thing they want me to be.”

“They” are the government agencies, scientists and charities who for 70 years have decided how nature should be protected in Britain. These illustrious groups and experts have tried to save wild places and stop the loss of species. They’ve scored some notable successes – once-endangered species such as peregrine falcons have been revived and the Wildlife Trusts alone have created more nature reserves than there are branches of McDonald’s – but, broadly speaking, they’ve failed. Britain has lost more of its nature than most other countries in the world. Almost every species or measurable wild habitat produces a graph plummeting downwards.

Over the last 70 years, 98% of wildflower meadows in England and Wales have been destroyed; three-quarters of ponds and heaths have vanished; half the remaining fragments of ancient woods have been obliterated. The creatures inside this habitat have gone too: since 1970, more than half of Britain’s farmland birds have disappeared, while a quarter of mammals are endangered and three-quarters of butterfly species have declined. Overall one in 10 species are threatened with extinction; 500 species have already disappeared from England. Most alarmingly, this dramatic loss of biodiversity has accelerated in the last decade. During the same period, government funding for British wildlife and the environment has been cut by 30%.

Can one individual do anything about an extinction crisis caused by the way we live, farm and build? White is doing something. For almost all of his 61 years, he has laboured mostly alone; for the last 10 years, he has been breeding native butterflies from his modest terraced house in the East Midlands for release across the country. He is part of a small, scattered band of secret breeders – or “introductionists” as they prefer – who have taken it on themselves to bring back wild species that have fallen victim to what one nature writer calls “the great thinning” of non-human life.

Read the full story here:  Turn back the tide

The not-so-secret lives of urban birds

Can we think about other species as relatives rather than resources?