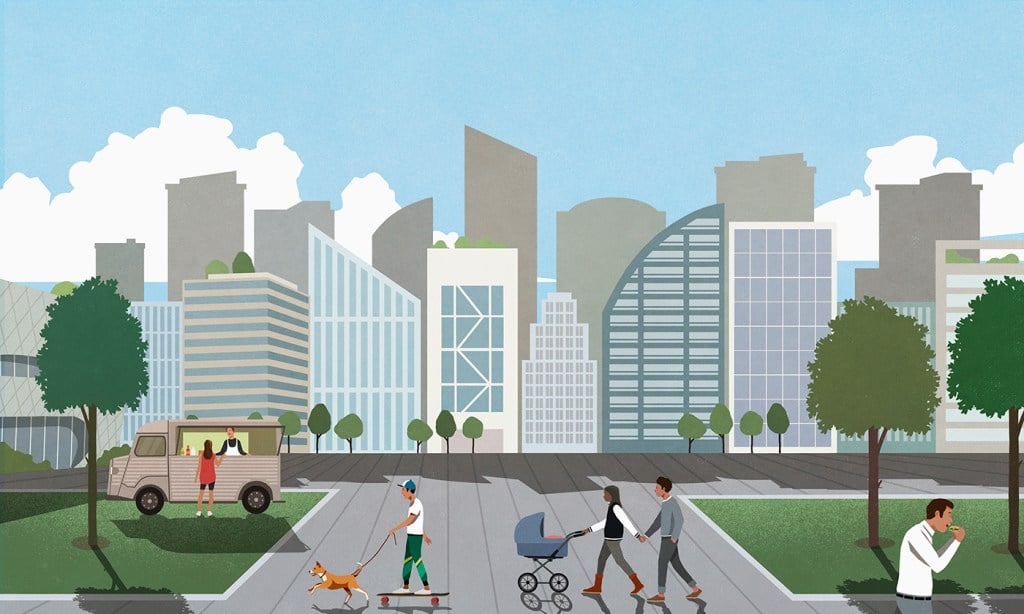 As planners continue to drive up the density of urban areas, a consequence is the inevitable increase in congested roadways. This in turn leads to increased driver tension and impatience.

It comes as no surprise to those calling for improved public transport facilities.  If we were living in Scandinavian countries such as Sweden and Norway these issues would have been dealt with by ensuring that infrastructure such as public transport was built as a pre-requisite – before the development of new subdivisions and infill within existing suburbs.

Now after the horse has bolted there is some attention being given to what we want our urban areas to not only look like but how they will function for those who live there – some would say trapped there.  Walkability then becomes a real issue of public importance, in areas where cars have become a dominant means of transport in spite of the longer travel times that result from congested roads.

In this story by Andy Hirschfeld, Urban Walkability Gains a Foothold in the U.S. (Yes magazine, May 5 2021), he explores what’s known as a 15-Minute City – an urban concept in which all basic needs can be satisfied with a 15-minute walk or bike ride. It’s catching on in the U.S. as an indirect reaction to the pandemic.  And we say: it needs to catch on here as well.

Here’s a short extract that might be a tempter to check out the full article.

Pop-up parks and outdoor cafes taking over the streets, as they are in New York City, are often referred to as “parklets.” Parklets have been considered a stable tool in the tactical urbanism playbook, and now have become a mainstay in city streets across the country.

Open streets concepts have also proved to be successful over the long term. In the early days of the pandemic, the city of Seattle launched its Stay Healthy Streets program, closing more than 25 miles of city streets to through traffic to give that space back to pedestrians and bikers. In May 2020, Mayor Jenny Durkan announced that many of those closures would become permanent.

Not only do these moves improve the health and economy of American cities, but they have also allowed for social connection in a time when people have been largely isolated from each other.

“Fifteen-minute cities are not just about walking and cycling. It’s about the connection you want and a place to socialize,” says Helene Chartier, Head of Zero Carbon Development for C40 Cities, a coalition of cities around the globe focused on tackling issues like climate change.

The next step will be to translate the growing momentum into holistic 15-Minute City policies for after the pandemic. The mayors of cities such as New Orleans and Austin, among others, have expressed interest in adopting policies as part of the C40 Cities Climate Leadership Group.

Portland, Oregon, was the early adopter of these concepts. In 2010, the city introduced its 20-Minute Neighbourhoods program—essentially the same concept as the 15-Minute City. The program is intended to support 90% of all Portland residents with more walkable and bikeable infrastructure by 2030, and has been included in the city’s Climate Plan.

Detroit also has a plan in place. First introduced by Mayor Mike Duggan in 2016, Detroit’s 20-Minute Neighbourhood concept is an effort to revitalize the city’s lower east side. The plan calls for all residents to be within 20 minutes of transit, parks, retail, and essential services, and at least 20 minutes from “blight,” which is defined as “blighted buildings, derelict streetscapes, nor crumbling infrastructure.”

Creating a holistic policy is not as simple as expanding sidewalks, or replacing a parking lot with a park or a grocery store. Cities must reform their existing land use codes. The Congress for New Urbanism is closely working with cities around the country to reform those codes.

Can we think about other species as relatives rather than resources?