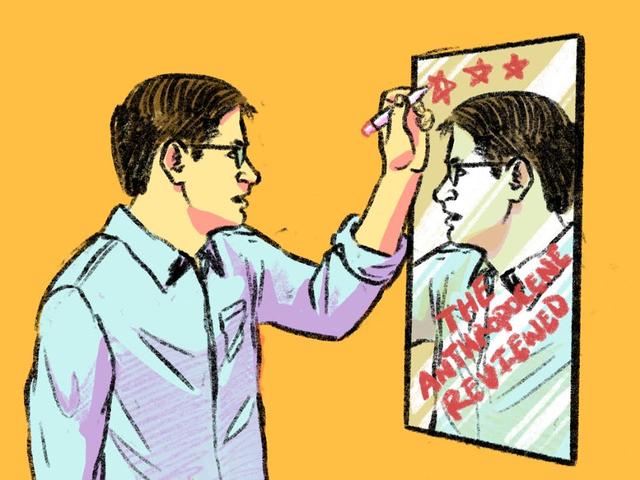 Our second part of the John Green feature: The Anthropocene Reviewed.

Sometimes I like to image benevolent aliens visiting Earth.  In my daydreams, these aliens are galactic anthropologists, seeking to understand the cultures, rituals, preoccupations, and divinities of various sentient species.   They would conduct careful field research, observing us.  They would ask open-ended, nonjudgmental questions, like “What, or whom, is in your view worth of sacrifice?” I hope that these alien anthropologists would like us.

In time, the aliens would come to understand almost everything about us – our ceaseless yearning, our habit of wandering, how we love the feeling of the sun’s light on our skin.  At last, they would have only one question remaining: “We have noted that there is a green god that you keep in front of and behind your houses, and we have seen how you are devoted to the care of this ornamental plant god.  You call it Kentucky bluegrass, although it is neither blue nor from Kentucky.  Here is what we are wondering: Why do you worship this species?  Why do you value it over all other plants?”

The word lawn didn’t even exist until the 1500s.  Back then “lawns” referred to expanses of grass shared by communities to feed grazing livestock, as opposed to ‘fields,” which denoted land used to grow plants for human consumption.  But by the eighteenth century in England, ornamental laws similar to the ones we know now had emerged – back then, lawns were maintained by handheld scythes and shears, and so keeping a lawn without the help of grazing animals was a sign you were rich enough to have lots of gardeners, and also to own land that did nothing by look good.  [Look good depending on your worldview]

The ornamental lawn spread throughout Europe and elsewhere.

Later …
It is truly staggering how much of our shared resources we devote to Kentucky bluegrass and its cousins.
We spend tens of billions of dollars a year on lawn maintenance [in the USA].
One could devote a front yard to growing plants that humans can eat.
(Page 165-166 and 167-168 in Kentucky Bluegrass)

Third things are essential to marriages, objects or practices or habits or arts or institutions or games or human beings that provide a site of joint rapture or contentment.  Each member of a couple is separate; the two come together in double attention. Hall goes on to note that third things might be John Keats or the Boston Symphony Orchestra or children [or cultural experience, or …   in our case a visit to Munibung Hill … ]  …  Our kids are critical sites of joint rapture for Sarah and me, but we have other third-things to. (Page 185)

Looking up toward the looming mountain ranges in the distance, I was reminded of what nature is always telling me: Humans are not the protagonists of this planet’s story.  If there is a main character, it is life iself, which makes of earth and starlight something more than earth and starlight.  But in the age of the Anthropocene, humans tend to believe, despite all the evidence, that the world is here our benefit. (Page 193)

The artist Doi once remarked, “I have to keep on working, otherwise nothing will be brought into existence.”  But somethings, I feel like the paper is better before we get hold of it, when it is still wood – as a tree no less.

I know we’ve left scars everywhere, and that our obsessive desire to make and have and do and say and go and get – six of the most common verbs in English – may ultimately steal away our ability to be, the most common verb in English.  Even though we know that none of our marks will truly last, that time is coming not just for all of us, but for all the marks we make, we can’t stop scribbling, can’t stop seeking relief wherever we can find it.

The residents of Damascus (back in the days of the plague) left us a model for how to live in this precedented now.  As the poet Robert Frost put it, “The only way out is through.” And the only way through is together.  Even when circumstances separate us – in fact, especially when they do – the way though is together. (Page 215 in Plague)

There’s an Emily Dickenson poem that begins “I fel a Funeral, in my Brain.” It’s one o fht eonly poems I’ve managed to commit memory.  It ends like this:

And there is Plank in Reason, broke,
And I dropped down, and down –
And hit a World, at every plunge,
And Finished knowing, – then –

several year ago, a plank in reason broke within me, and I dropped down and down, and hit a world at every plunge.  It wasn’t the first time. ….. I decided to try a geographical cure.   … I took myself to see the world largest ball of rubber bands.  Its creator Joel Waul wrote on his Myspace page, “First have a definite, clear practical idea, a goal, an objective.  Second, have the necessary means to achieve your ends.  Third, adjust all the means to that end” – Aristotle.
(Page 246-247  in The World’s Largest Ball of Paint)

[To what ends will we go to protect the things that we value most? – to protect Munibung Hill]

Twenty-four hundred years ago, Herodotus wrote that the Persian Kind Xerxes was marching his army through a grove of sycamore trees when he came across one of “such beauty that he was moved to decorate it with golden ornaments and to leave behind one of his soldiers to guard it.”
But for now I’m looking up at that tree, thinking about how it turned air and water and sunshine into wood and bark and leaves, and I realise that I am in the vast, dark shade of this immense tree.  I feel that solace of the shade, the relief it provides.
(Page 255 in Sycamore Trees)

[Whatever it is that we come across, be it a work of art, a movie, a piece of technology, whatever … this story applies]
So that’s how I always read the picture – the farmers are symbols of a precarious historical moment.  They are reminders that I, too, would in time be surprised by history, and that a picture, though static, keeps changing as its viewers change.  As Anais Nin put it, “We do not see things as they are, we see them as we are.”
August Sander, Young Farmers 1914.
(Page 265 in Three Farmers on their Way to a Dance)

“I smell the wound and it smells like me,” Terry Tempest Williams writes in Erosion.  I live in a wounded world, and I know I am the wound.  Earth destroying Earth with Earth.
What does it mean to live in a world where you have the power to end species by the thousands, but you can also be  brought to your knees, or to your end, by a single strand of RNA? ..
We are in many respects, so small so frail, so gloriously and terrifyingly temporary.
We must ride on in a melting Earth, all the while knowing who is melting it.  A species that has only ever found its way to more must now find its way to less.
Sometimes, I wonder how I can survive in this world when, as Mary Oliver put it,  “Everything / Sooner or later /  Is part of everything else.”  Other times, I remember that I won’t survive of course.  I will sooner or later, be the everything that is part of everything else.  But until then: What an astonishment to breathe on this breathing planet.  What a blessing to be Earth loving Earth.
(Page 273-274 in Postscript)