When it comes to isolation and being alone, Jon Muir could be referred as something of an expert.  The current lockdown and the associated limitations on gathering in groups is something he has experienced not because it was imposed on him from an outside authority but by choice.

In 2001 Jon embarked on a 128 day trek across Australia without all the conveniences and comforts we would normally associate with going bush.  No caravan or camper trailer with all the mod cons most people would pack in preparation for an expedition of this duration.  No overnight stays at roadhouses.   Only a ‘trailer’ of the size that could be pulled by human power, since this trip was done on foot – shanks’s pony, being the old phrase about using one’s own legs as a means of conveyance.

In this story published in the SMH, 1st May 2020, Jon writes: ‘Four months alone, foraging and hunting as I went, was a bit like layering the current social isolation with a menu of feral cat and termites (on a good day), months without showering, sometimes drinking water from puddles polluted by dead animals and losing a third of my body weight.

‘This extreme social isolation also provided an opportunity for deep self-reflection, which is uncommon within the usual pace and distraction of the modern world. Throughout my lifetime of adventure, I’ve had many times of being alone where, inevitably, challenging aspects of myself begin to emerge. While initially difficult, facing my own demons and accepting those uncomfortable parts of myself is ultimately a healthy experience, bringing me back into balance.”

‘After the first two weeks, I started to melt into the landscape and become like any other wild creature. I had to continually read every nuanced change in the environment to stay alive and it starkly underlined for me what was most important in life. Those things many of us take for granted every day: water, food, shelter and companionship.

‘After the first two weeks, I started to melt into the landscape and become like any other wild creature.’

‘My experience of social isolation then and on previous expeditions was that it allows for deep connectedness to nature. It is a way of being that has almost been forgotten during the past century of industrial growth and urban spread, but which I believe we all hold in our collective memory from previous millennia of hunting, foraging and growing food.

‘The natural world is our real home, far more than the civilisation we have constructed for ourselves, which is but a small blip in an eternal web of life and one we have to start valuing now as if our lives depend on it. Because they do. 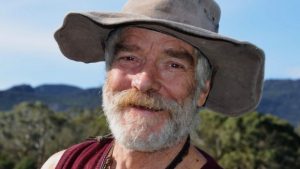 ‘Walking alone across Australia for four months gave me plenty of time to think. I came to see that we were experiencing a global ‘tragedy of the commons’ where the environmental ‘capital’ that sustains us was being dangerously eroded to the point of collapse by our addiction to consumption.

To read the full story log onto: Day of reckoning for brave new world

Jon Muir, OAM, was the first Australian to climb Mount Everest without sherpa support and has walked to both poles. He is the recipient of two Australian Geographic awards – the Adventurer of the Year award in 2001 and the Lifetime of Adventure award in 2017 – and is the subject of the documentary Alone Across Australia.