Spiders are everywhere.  So much so, we don’t even know of their existence, so small are so many of them.  Being tiny, being hidden away behind bark or under leaves, being able to camouflage themselves so skillfully, means that we – even those of us who are supposedly super scared of spider – wander about oblivious to their presence.  But that doesn’t seem to reassure us and Robert Whyte, spider guru has spent a good number of years working our why and working on how to put our minds at rest, in the interests of being happy to get into the bush as well as in the interests of having spiders better understood for their role in nature and their long term health and survival.

In this story: Queensland Museum spider expert explains why we shouldn’t be scared of spiders. (News.com, June 9, 2017) it’s agreed that it’s no wonder most people have a crippling fear of spiders when they are given threatening names like funnel-web, redback and huntsman.

But this spider expert has set out to cure our creepy crawly phobias in just five minutes, using other spiders with more pleasant names like the Alien Butt spider, Golden Orb Weaver and the Disco-mirror ball spider. Queensland Museum spider research scientist Robert Whyte argues there really isn’t a reason why we should be scared of spiders. To back up his claim, he’s co-authored a book: A Field Guide to Spiders of Australia, with QIMR Berghofer Medical Research Institute scientist Greg Anderson.

Read more here: Spider expert explains why we shouldn’t be scared of spiders.

Robert Whyte says there could be as many as 200 spiders per square metre in the bush.  How many do you reckon that might be living at Munibung Hill?  195 hectares at 1000 square metres per hectare equals 195,000 square metres times 200 equals 39 million spiders.  We pay them little attention, but it seems odd that right now we have not one single spider image featured in our website gallery. This is an omission we need to correct. 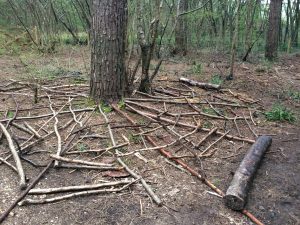 For more try this link from The Conversation for helping overcome our aversion to spiders – Don’t like spiders: ten reasons to change your mind
And this link for information about getting involved in: Citizen science programs.
And a link to: Incy wincy spider school

A small selection of extracts from the book is included here to provide a brief overview of what to expect and what to look for when getting started on the fascinating discovery journey that is the spiders of Australia. 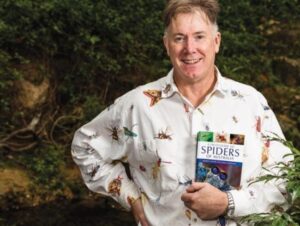 A Field Guide to Spiders of Australia
By Robert Whyte and Greg Anderson
CSIRO Publishing, 2017

From the Foreword by Tim Lowe
.. As children most of us were taught to dislike and fear spiders.
.. Robert Whyte showed negligible interest in nature in his twenties.  This book shows how deeply and successfully he has embraced his life’s purpose.
.. Birdwatcher’s carry binoculars as a materr of course and we should all carry magnifying glasses so we can properly enjoy life at the small end of the spectrum.  Butterflies win more praise than Peacock and Jewel Spiders only because they are larger.

Introduction
.. The current explorers in this field know all too well how much there is  still to learn.  If you join then you are very likely, within a few days, to discover an undescribed species yourself, a species new to science.  That’s exciting and pretty rare in biological studies.  There are not many groups of animals visible to the naked eye which have so many new species to discover in your own backyard or in nearby bush. The adventure of discovering and naming new species is just the beginning.  How do these species function?  How do they fit into food webs?  What their ecological roles, their life cycles, behaviours, strengths and weaknesses?
.. In answering these questions, not only can you satisfy your own curiosity, you can also contribute to the world’s knowledge of nature.  Let’s face it, there couldn’t be a better time to discover new nature – before it disappears.
.. [It] is rather odd, in a world that explores distant galaxies and the depths of the oceans, because spiders are everywhere and often close by.  They occupy virtually every possible habitat niche and every continent.
.. There are possibly an average of 200 per square metre.   There are spiders in the forest canopy, under leaves, under bark, in leaf litter and underground.  There are also spiders so small they are often overlooked, and others so well camouflaged you miss then even in plain sight.
.. In Australia, we know of thousands of spider species which exist but are unidentified.  Others are yet to be discovered.

Why are so many spiders unknown?
.. Australia is a vast, old continent and it has been on its own, separated from other land masses, for a long time. Around 80 million years ago Australia and its most recent companion, Antarctica, began slowly separating  … and so on …
.. The result of all this has been plenty of time for separate evolution.  This is why more than 90 per cent of Australia’s invertebrate species are known nowhere else.
.. The closer you look, the more you find.  One simply has to accept this world of the small, the engine room of ecosystems everywhere, is something that may never be completely mapped, defined or written down.  But this shouldn’t stop us trying.
.. Everyone has a story about spiders and most people have an opinion about them.  More and more the opinions are becoming favourable  as people learn spiders are fascinating and wonderful to photograph.
.. The vast majority of spiders are harmless and all of them, in fact, are beneficial.

From arachnophobia to arachnophilia
Fear of spiders is learned.  It is not innate.  It is one of those fears switched on or not in early childhood.  It is learned from people around the child who make the ‘disgust-and-horror’ face when they see a spider.  In other cultures where eating spiders is routine, this fear is not expressed and therefore it is not switched on.
While fear of spiders is an acquired fear, it is still very real. …..  The good news is – arachnophobia can be unlearned.  With careful desensitisation and a positive outlook, fear can be overcome, even reversed. 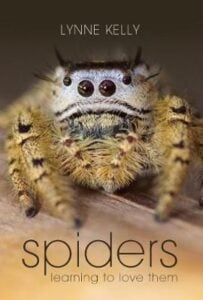 Spiders: Learning to Love Them by Lynne Kelly tells the story of how Lynne overcame her night terrors by studying spiders in her garden.

When beginning to cure your arachnophobia and desensitizing yourself to reduce fear of spiders, it’s probably best not to start with a big hairy Huntsman.  Why not try this adorable jumping spider only 3mm long, completely harmless to humans and extraordinarily cute.  You can get to know it and maybe even give it a name – Female 4.5mm,  Male 3.0mm

Saticidae – Jumping Spiders
.. These are the world’s most diverse and abundant spider family, with over 500 described genera and more than 5,000 described species.
.. Some courtship displays in Maratus spp (Peacock Spiders) feature a complicated ritual of leg waving, toe-tapping and abdomen twerking.  Most have brilliantly coloured side flaps they extend like peacock tail feathers to mesmerise  their mates.
.. Observations of these spiders have included locations such as —
Sydney – Maratus Volans, Flying Peacock Spider (can’t actually fly)  – groups are known as a tribe
Seal Rocks – as above

Page 287
Calling all citizen scientists for project Opisthoncus
.. Opisthoncus is a genus of medium to large daytime hunters.  They are probably the most commonly encountered Jumping Spiders in Australian gardens.  Opisthoncus expert Marek Zabka says it is likely we have more than 100 Australian species, but currently only around 30 are officially known.
.. However, some of the species in the Word Spider Catalogue are problematic.
.. Most of all we need observations of biology behavioiur and life cycles in nature.  There are plenty of specimens in museums, but little is known about how they live and interact, who’s having sex with whom, and how they bring up their young.  It could be a case of citizen science to the rescue, given how common these jumpers are in gardens –  and in the bush.
.. So It’s over to you, if you are up to the challenge.  See what you can find and don’t forget to take your camera with you.

The psychology behind behavior change