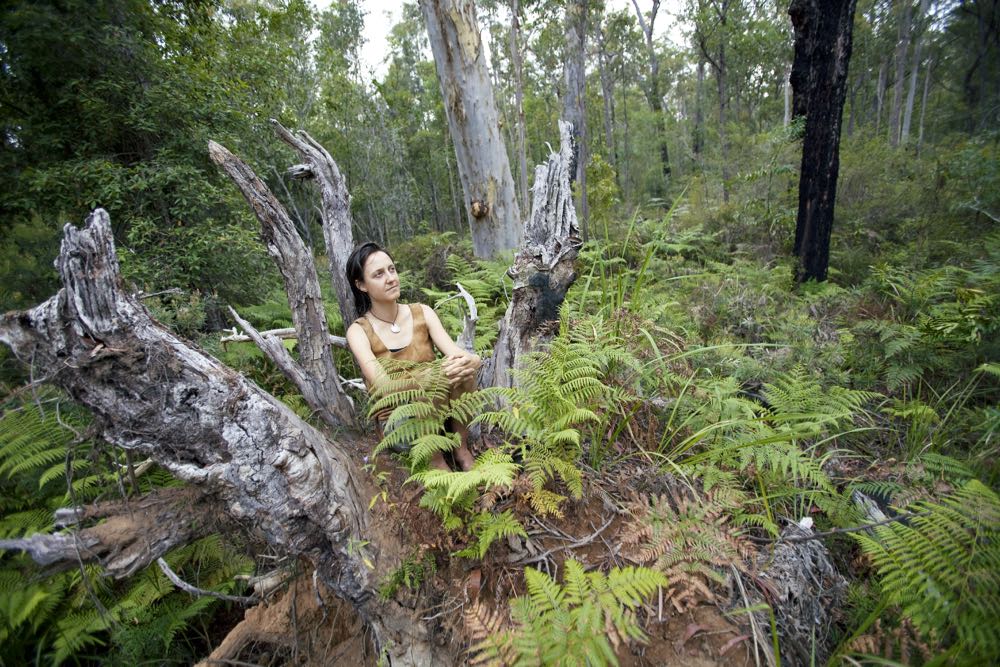 Claire Dunn takes in the bush from her sit-spot.

This time of the year provides us with the opportunity to take a break and reflect on what has taken place over the last 12 months.  The Summer Solstice with the longest day (for us in the southern hemisphere), is another marker in the changing seasons that is overlooked – indeed overtaken – by human cultural events such as Christmas and Boxing Day and the coming New Year. Important as these have become, they need to be celebrated within a natural world context and not elevated disproportionately and beyond which mother earth can happily provide.  So it is timely to introduce rewilding as a counter to our consumer culture.

When we talk about urban rewilding we are not only referring to the rewilding of our urban areas but also, maintaining as many existing wild areas as possible.  Rewilding in a landscape sense is one aspect, we also need to do some rewilding of our thinking – rewilding our brains, getting them out of the suburban malaise of thinking that everything revolves around the human condition and economic growth, forgetting that it is from the wild areas that we evolved and from which we source every part of our understanding at a social and economic level.  For none of these exist outside of nature.  Every social and economic act has an ecological consequence irrespective of whether we would like it to or not.

In Urban Rewilding: Reverse-Engineering Cities to Save Nature – And Ourselves, SA Rogers, reports: “The concept of rewilding has been around for decades, and it’s not necessarily a cohesive movement or concept, but rather a collection of related goals. Some define ‘rewilding’ specifically as the reintroduction of apex predators to certain regions, but just as often, it simply means allowing nature to take over far more often than we do. That might look like any number of things: removing sea walls and dams, reinstating river meanders, protecting certain marine sites from fishing and harvesting, allowing brownfield sites to grow wild after cleanup, making concrete channels more hospitable to wildlife or restoring floodplains.”  Our reference is Web Urbanist – see link below.

Rewilding is more than a theory.  There are people who practice rewilding principles on a daily basis.  One such person is Claire Dunn who writes about: “… mapping the language of the birds, carving symbols into staffs, collecting acorns, climbing trees, examining animal tracks, playing games, sketching in our nature journals, and sharing stories around lunchtime fires,” in Dumbo Feather (#56 August 2018).

“Although the skills are ancient, they are new again for many in the western world now seeking to (re)learn the ways of our ancestors—re-examining everything from our food to our footwear. Learning daily practices to ground ourselves in the rhythms of nature, and acquainting ourselves with the plants, animals and elements of our bio-region, the movement dubbed “rewilding” is an attempt to reclaim once again our birthright of connection and belonging; an antidote to the sedentary, screen-addicted and often alienating culture of the modern human.”

Claire goes on to say: “At a workshop I offered at the National Sustainable Living Festival this year I had people take a tourist test, with questions like: where does your tap water come from? Where is the moon in its lunar cycle right now? What is the nearest wild edible plant at your backdoor? What’s the first bird that calls of a morning?  …. most people were shocked at how little they knew about their immediate environment.”  For the full story go to:  https://www.dumbofeather.com/articles/urban-rewilding/

In an age of mass extinctions and climate chaos, can we reverse-engineer some aspects of our built environments to live in greater harmony with nature? Many of our cities are built on former wetlands, fighting a losing battle with erosion and the sea. We’ve lined important ecological corridors with concrete. We’ve hunted into oblivion many of the very species that could help keep the rest of the food chain in check. Much of our architecture is focused on shutting ourselves away from nature, as if we could escape it. But advocates for ‘rewilding’ say all we have to do to repair some of the damage humanity has wrought upon the Earth is let go of our obsession with control.   https://weburbanist.com/2018/08/06/urban-rewilding-reverse-engineering-cities-to-save-nature-and-ourselves/

I recommend a family walk up Munibung Hill, says father of four