If one of the stories we are telling ourselves is that we’re living in a breaking world, where social order, ecological systems and financial stress, are all collapsing, then we can do one of three things.

We can join in, further contributing to the chaos,
We can sit on the sidelines and do nothing, or
We can join the menders.

The mending a broken world way of thinking, is one of involvement, doing the best we can in making good the damage done by helping restore and re-mend that which is falling apart and in need of repair and restoration.  Whether it is old clothes, aging furniture, or in the case of Munibung Hill, a degraded area of bushland, we can be menders.

Mending the World, One Knee-Patch at a Time: How repairing my kids’ clothes has helped me get through this challenging year, by Brianna Sharpe, Feb 5, 2021

Last February, I invited a group of friends over to mend clothing and drink tea. While the snow fell outside, we gushed over thread colours, shared techniques, and admired one another’s handiwork. I repurposed an old (unused) diaper liner into a patch for jeans. My friend Gisele showed us how to darn a wool sock, whisking us back to a slower time. Although the evening was more banter than backstitch, it turned fixing fabric into a chance for connection instead of a chore. 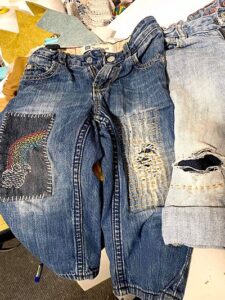 As Kate Sekules pointed out in a recent episode of the vintage style podcast Pre-Loved, the history of mending is “not … very sexy.” In conversation with the show’s host, Emily Stochl, Sekules goes on to explain that across time and culture, clothes were often the most valuable and labour-intensive thing people would own. These days, of course, the opposite can also be true. Mending takes time and mental space, which are resources many can’t justify spending when t-shirts are $5 at Walmart.

“[Mending] has got a sort of shameful history, of course, because mending in history speaks of poverty and deprivation, and even worse things,” Sekules says.

More here at Mending the world, one knee-patch at a time.

Finding Beauty in a Broken World, by Terry Tempest Williams

In her most original, provocative, and eloquently moving book since “Refuge,” Terry Tempest Williams gives us a luminous chronicle of finding beauty in a broken world.

Always an impassioned and far-sighted advocate for a just relationship between the natural world and humankind, Williams has broadened her concerns over the past several years to include a reconfiguration of family and community in her search for a deeper understanding of what it means to be human in an era of physical and spiritual fragmentation.

Williams begins in Ravenna, Italy, where “jeweled ceilings became lavish tales” through the art of mosaic. She discovers that mosaic is not just an art form but a form of integration, and when she returns to the American Southwest, her physical and spiritual home, and observes a clan of prairie dogs on the brink of extinction, she apprehends an ecological mosaic created by a remarkable species in the sagebrush steppes of the Colorado Plateau. And, finally, Williams travels to a small village in Rwanda, where, along with fellow artists, she joins survivors of the 1994 genocide and builds a memorial literally from the rubble of war, an act that becomes a spark for social change and healing.

A singular meditation on how the natural and human worlds both collide and connect in violence and beauty, this is a work of uncommon perceptions that dares to find intersections between arrogance and empathy, tumult and peace, constructing a narrative of hopeful acts by taking that which is broken and creating something whole.

Pathways to knowledge are located in ‘living Country’