There’s  two sides to every story.  It doesn’t have to be oblivion for native animals.  We know what to do.  Will we rise to the challenge and give wildlife the necessary crossings they need to safely get to the other side? In: Misguided roads: This (other) road toll keeps going up (Wildlife Australia / Summer 2021 Vol. 58 No. 4) reports on  Australian research that clearly shows how opening up regions with new roads, or even expanding an existing major road, has immediate negative consequences for wildlife. According to a Queensland-based research project in 2014, led by JR Rhodes, titled ‘A Few Large Roads or Many Small Ones? How to Accommodate Growth in Vehicle Numbers to Minimise Impacts on Wildlife’, nature conservation is very low on the list of priorities in Australian road developments, reflecting trends from similar overseas countries such as Canada and the US.

“With landscapes becoming increasingly dominated by humans, the impact of roads on wildlife populations is growing rapidly,” researchers wrote in the introduction.   “The direct effects of roads are wide ranging and include the destruction and modification of habitat, the modification of animal behaviour, the fragmentation of habitat by the formation of barriers and vehicle collisions.

Australia has a special roadkill problem

Australia’s situation is even more precarious with road development because of the number of species, on a world scale, that are directly affected.  Wildlife populations in a region will occasionally disappear or die out before local authorities have even identified a problem.

Later …
In a Canadian study – in the Ottawa region – researchers clearly observed the density of frogs (anurans) declining and the proportion of dead frogs increasing with traffic intensity growing on roads near Ottawa.

Later …
So the signs are there, says Rhodes, but Australians have to try harder, and plan better, to lower the national animal road toll.  Otherwise we are not really about saving our rich native wildlife heritage.

It’s the problem no one really wants to think about too much. But what can be done to reduce roadkill as development expands? And how can you help keep animals safe if you’re out driving this summer?

Imagine it’s dark and you’re looking for your family. You can hear them in the distance, on the other side of the gap in the bush. There is another noise too; something heavy and loud, but moving too fast to be a storm. You inch across the tarmac, sniffing. Sometimes there’s food in the gap, dead things left on this strange black strip where nothing grows.

You’re halfway across when the world turns white. Lights – too bright to see through – and the noise, suddenly louder, closer. Something big. You run back the way you came – the wrong way. The noise has a hard edge. Glass shatters against your back as you’re thrown up by the impact. But, if you’re lucky, you don’t feel that second hit – the world has already gone black.

We know this scene from the other perspective; from behind the lights. The horrible thud of a wheel hitting an animal.  Sometimes, a windscreen cracking under the weight of something dying. Roadkill is a familiar sight on most long drives in Australia – and just about anywhere in the world. Here it’s often kangaroos and wombats coming to grief, sometimes koalas or cassowaries. In Europe, it’s elk and deer. In North America, moose, bears, wolves and mountain lions. In India, even tigers are threatened by highways.

Roads now cover an estimated 64 million kilometres of the planet’s surface (that’s 160 times the distance to the moon). Australia’s Highway 1 is the longest in the world at 14,500 kilometres. And this ever-expanding web of roads has carved up the wilderness, leaving animals with often fragmented islands of habitat.

“Animals need to move,” says one of the world’s top road ecologists, Professor Darryl Jones, “whether to find a mate or new territory or food. Sooner or later they’re going to hit a road.”

He recalls a research trip into the remote jungles of Borneo where one day “the mists parted and there on the tiny dirt road was a clouded leopard, one of the rarest animals in the world”. But a year later when Jones returned to that exact spot as part of his annual expedition, the forest on either side had been torn up and the little dirt road had become a thrumming superhighway. “I just thought, where is that leopard going to go? And what happens [to the species] if it doesn’t get where it needs to?’” 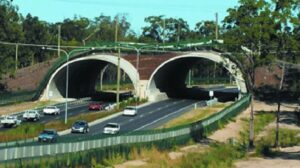 Still, the meeting of roads and wildlife doesn’t always have to end in disaster. About a decade ago, Jones helped develop one of the world’s first “wildlife bridges” in Brisbane, now used by koalas, wallabies and more to cross the Compton Road highway where it cuts through rainforest. “There’s lots of solutions out there now that we know work,” he says.

So, what are the most promising (and realistic) ways to reduce the toll? And what should you do if you come across wildlife injured on the road?

How big is the problem?
The number of animals killed on the roads every year is staggering, says Dr Bruce Englefield, who researches the problem in the world’s roadkill capital, Tasmania. “When I first came on holiday to Australia from the UK, it really shook me, what I saw.”

But official data is patchy. Most governments don’t keep very accurate counts; bodies are often removed by councils looking to tidy up their neighbourhood or an animal might slink off into the bush to die after a hit, unnoticed. Englefield has calculated a “very, very conservative” estimate of four million native mammals killed annually on Australian roads.

“The numbers that are being squashed on the road is astronomical.”

That number, published by the CSIRO, is big enough, says Jones. “But the truly unbelievable numbers are the small animals, which nobody takes any notice of; the frogs, reptiles and others. Those hot summer nights when the frogs are out, the numbers that are being squashed on the road is astronomical. Terrifying.”

Onus for election placards should be with manufacturers

How not to be an invasive species. It’s time we became naturalised