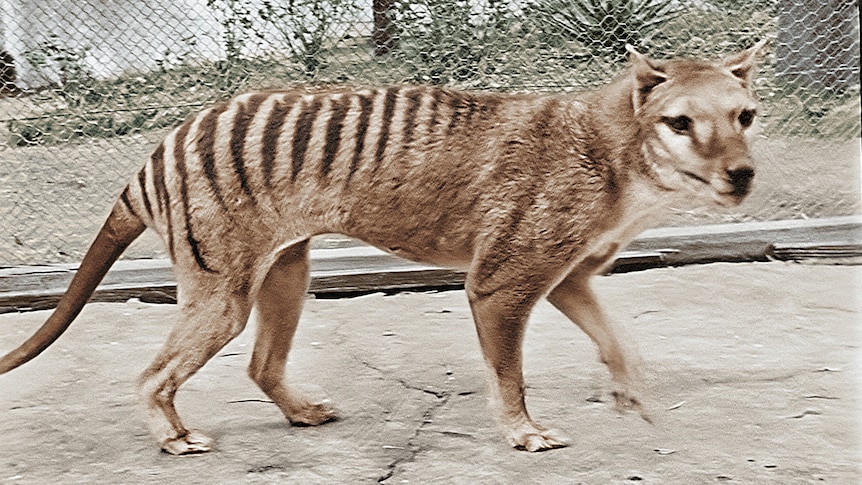 There is a picture depicting a young girl gazing into a glass cabinet with a caption that reads: As close as she will get – a taxidermied Tasmanian Tiger on Display in Melbourne Museum in 2021.  Credit: Joe Armao (SMH 23 July 2022)

How many times do we have to be told that Australia is the extinction superpower, before we do something really tangible about it? This story relates to the big picture, but locally we are witnessing the decline of species, such as the Bandicoot, for the same reasons – habitat destruction,  urban locked landscapes leaving native animals highly vulnerable to predation by introduced species such as foxes and cats. The wake up calls of the past don’t seem to have resonated sufficiently to make the required differences in favour of protecting and conserving the species we claim to value, but not give sufficient priority to give substance to the value in real terms. There are two sides to every story, to every situation, and this story notes that the Australian narrative which ends with extinction outcomes doesn’t have to be repeated. There is another way.

The wanton destruction of such an extraordinary animal, the thylacine aka the Tasmanian tiger – a two-metre long carnivorous marsupial that roamed our forests, its males carrying their young in a pouch – is viewed as a national shame, writes Nick O’Malley in Staring into the abyss (SMH 23 July 2022). These extracts follow …

The writer Richard Flanagan would later describe the Tasmanian tiger as a “a lost object of awe, one more symbol of our feckless ignorance and stupidity”.

You would be forgiven for thinking that it marked a turning point. You’d be wrong.

Fast-forward to 2009, when scientists began warning the federal government that the Christmas Island pipistrelle was in dire need of help.

The pipistrelle is, or was, a microbat weighing just under five grams that lived in the forests of the remote Australian island just south of Java.

Though abundant until around 25 years ago in the early years of the new century scientists began warning its numbers had collapsed dramatically. Some, including Tim Flannery, appealed to the government for help. With a few hundred thousand dollars a breeding program might be established. The idea was knocked back.

“We don’t know precisely what happened to it,” wrote Flannery in a sad and angry piece for the Herald a few years later when the extinction was confirmed. “Perhaps it landed on a leaf at dawn after a night feeding on moths and mosquitoes, and was torn to pieces by fire ants; perhaps it succumbed to a mounting toxic burden placed on its tiny body by insecticide spraying. Or maybe it was simply worn out with age and ceaseless activity, and died quietly in its tree hollow … With its passing, an entire species winked out of existence.”

This week the federal government’s publication of the five-yearly State of the Environment 2021 report confirmed what scientists already knew – that not only has Australia failed to act fast enough on climate change, arrest its logging or properly husband its precious water resources, we are still killing off our unique fauna at a horrifying rate.

This is what frustrates Professor Brendan Wintle (pictured right), a global leader in conservation ecology based at the University of Melbourne. While in some countries the listing of an animal as threatened tends to mark a turnaround in its numbers, in Australia it is often simply a milestone on that animal’s march to extinction.

Four years after the thylacine died of exposure in Tasmania, the North American bald eagle was recognised as being at risk. Like the thylacine its numbers had had plummeted due to hunting and habitat destruction.  The US determined that the eagle was “no longer a mere bird of biological interest but a symbol of the American ideals of freedom” and outlawed the killing or disturbance of bald eagles or their eggs. And later when DDT was implicated in a second decline, the chemical was banned and eagles’ habitats were protected by law, as part of a rehabilitation effort that by 2007 saw the bald eagle removed from the endangered species list and the population is now well over 300,000.  It has been rescued by the coordinated efforts of state and federal governments, scientists, researchers and volunteers, all backed by legal mandate.

In US endangered species legislation compels action, explains Wintle. When an animal is listed authorities must act. Critical habitat must be protected and funds for rehabilitation efforts supplied.

Under the relevant Australian law, the Environment Protection and Biodiversity Conservation Act, listing does not guarantee funding and action is taken at the discretion of the federal minister – a minister who serves in a cabinet with competing interests over land use and allocation of scarce resources.

As a result, says Wintle, while in America the population of an endangered bird will on average double after 20 years and grows on average by 600 per cent in the 40 years after it is listed, in Australia it is more likely to continue to decline.

Any sense the public has that the wave of extinctions that followed European settlement has slowed is simply false, says Wintle.

The main tool we have built to save these animals is in many cases proving fit only to monitor them into oblivion.

For the full story: State of Environment report: Why Australia’s native species protection methods are worse than the US (smh.com.au)

Nature is a master teacher about living well in the world