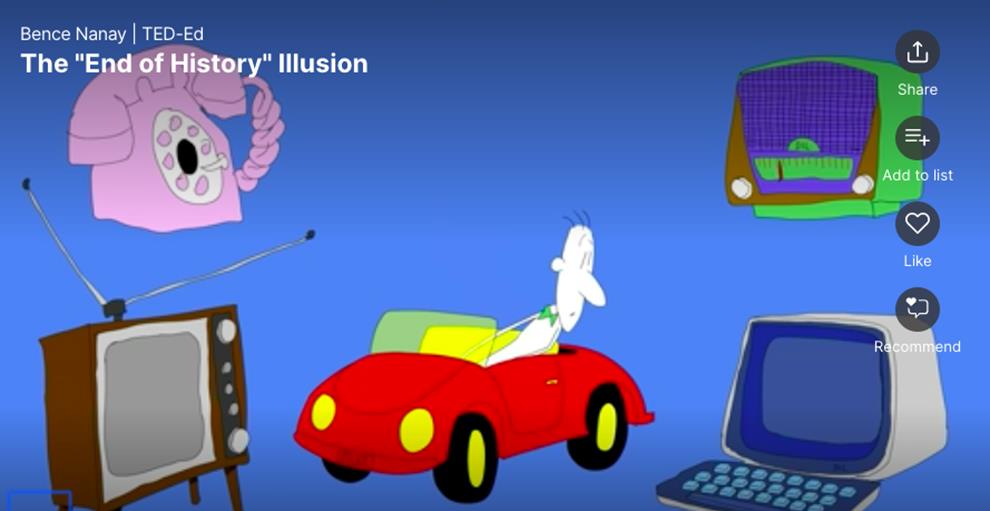 This is a phenomenon that goes back a long way.  As much a delusion as an illusion, the scientists behind this finding have done us a great service by bringing this to our attention.  Once we understand how this can effect our choices, we can take steps to reconfigure future decision-making in the best interests of mother earth and ourselves.

In: The End of History Illusion, Jodi Quoidbach, Daniel T.Gilbert and Timothy D.Wilson (Science, Volume 339, January 2013) shed some light on how our thinking can trap us into some kind of time warp not grounded in reality. A way of thinking that can be used by others to get the better of us, in ways that can trick us into adopting ideas that are not good for us as citizens of our communities and more importantly as citizens of Mother Earth. NOTE: The TED-Ed with Bence Nanay that we reference at the end, illustrates the subject very well – well worth the 4 minutes.

Quoidbach and her fellow researchers write:

We measured the personalities, values, and preferences of more than 19,000 people who ranged in age from 18 to 68 and asked them to report how much they had changed in the past decade and/or to predict how much they would change in the next decade.

Young people, middle-aged people, and older people all believed they had changed a lot in the past but would change relatively little in the future. People, it seems, regard the present as a watershed moment at which they have finally become the person they will be for the rest of their lives. This “end of history illusion” had practical consequences, leading people to overpay for future opportunities to indulge their current preferences.

At every stage of life, people make decisions that profoundly influence the lives of the people they will become—and when they finally become those people, they aren’t always thrilled about it. Young adults

One possibility is that people have a fundamental misconception about their future selves. Time is a powerful force that transforms people’s preferences, reshapes their values, and alters their personalities, and we suspect that people generally underestimate the magnitude of those changes. In other words, people may believe that who they are today is pretty much who they will be tomorrow, despite the fact that it isn’t who they were yesterday. In the studies we describe here, we showed that people expect to

change little in the future, despite knowing that they have changed a lot in the past, and that this tendency bedevils their decision-making. We call this tendency to underestimate the magnitude of future change the “end of history illusion.”

Across six studies of more than 19,000 participants, we found consistent evidence to indicate that people underestimate how much they will change in the future, and that doing so can lead to suboptimal decisions. Although these data cannot tell us what causes the end of history illusion, two possibilities seem likely.

First, most people believe that their personalities are attractive, their values admirable, and their preferences wise (10); and having reached that exalted state, they may be reluctant to entertain the possibility of change. People also like to believe that they know themselves well (11), and the possibility of future change may threaten that belief. In short, people are motivated to think well of themselves and to feel secure in that understanding, and the end of history illusion may help them accomplish these goals. 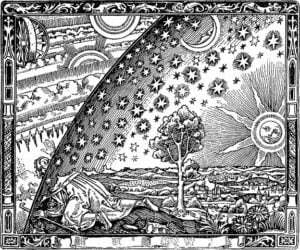 Second, there is at least one important difference between the cognitive processes that allow people to look forward and backward in time (12). Prospection is a constructive process, retrospection is a reconstructive process, and constructing new things is typically more difficult than reconstructing old ones (13, 14). The reason this matters is that people often draw inferences from the ease with which they can remember or imagine (15, 16). If people find it difficult to imagine the ways in which their traits, values, or preferences will change in the future, they may assume that such changes are unlikely. In short, people may confuse the difficulty of imagining personal change with the unlikelihood of change itself.

Although the magnitude of this end of history illusion in some of our studies was greater for younger people than for older people, it was nonetheless evident at every stage of adult life that we could analyse. Both teenagers and grandparents seem to believe that the pace of personal change has slowed to a crawl and that they have recently become the people they will remain.

Get the full story here: The end of history illusion.

The “End of History” Illusion — Time and time again, we’ve failed to predict that the technologies of the present will change the future. Recently, a similar pattern was discovered in our individual lives: we’re unable to predict change in ourselves. But is there anything wrong with assuming that who we are now is who we will continue to be? Bence Nanay details the consequences of seeing ourselves as finished products. [TED-Ed Animation by Stretch Films Inc].

How the end-of-history illusion prevents you from shaping your future self, Lindsay Morgia, M.S., M.P.P.

We can’t use ignorance as an excuse anymore