There is an increasing awareness of the impact of human society on the other than human earth community.  While this is only now getting some traction within some sections of government and industry, the notion has been around for a very long time. If we could only visualise ourselves nested within the larger earth community and mimic how this community functions, we might better appreciate that if they were applied at the human family and neighbourhood level the changes would be profound.   It helps to have new ways to expressing these ideas, and this one resonates with us, because it makes the connection with the very heart of the way we’ve organised ourselves into settlements such as villages, towns and cities.

Most of us now live in, or near, cities. We are experiencing a severe deficit of familiarity with the natural world. The most biologically complex terrestrial ecosystems are forests, and we are learning that our climate, and our lives, depend on the healthy functioning of these forests. But there are only a rare few forests remaining on Earth that still retain their original natural character.

Forests are complex ecosystems. But understanding them is not daunting.

The forest is a village, and like a human village, it is a response to its in environment and a community of people of various ages and lifestyles. I’d like to share this analogy with you, and extend it in such a way that you have a tool to understand, describe, and appreciate the natural world.

Says Barness, there are three ways we can make the case for describing the forest as a village, not unlike a human village …

First, the locality of a village can be seen reflected in its architecture and character.

In a natural forest, you can witness similar evidence of the natural environment. If you look carefully you can learn about the climate, geology, and disturbance pattern that defines the forest environment.

Second, a healthy village has children, elders, and adults. In this range of ages, the senior people have the wisdom and a wealth of personal experience, and the children have the potential and the hopes of the future.

In a healthy natural forest, there are seedlings, which like children will grow to their best potential and hope to be elders one day. There are mature adults, able to reproduce and at the height of their stature. And there are seniors, the old gnarled trees that embody the experience of their own unique history in their wooden knots. Like human elders, they are irreplaceable links to the past.

Third, there is a variety of jobs and lifestyles in a village. Human societies (in particular, cities) have farmers, doctors, cobblers, writers, and so on. In a forest, the green plants are the farmers—they collect the sunlight and combine it with oxygen to make food. All the other organisms—insects, birds, mushrooms, worms, and mammals—pursue other professions.

In these three fundamental ways, the forest is indeed a village. This analogy, while by no means a perfect one, can help in understanding the forest. We have a much easier time 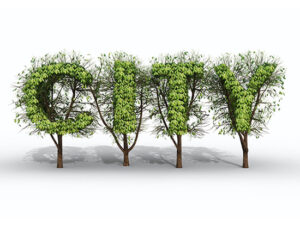 comprehending human relationships and social dynamics than we do non-human ones, so using the analogy of a forest as a village can open up a path of empathy and understanding.

When we cut down the natural forest and replant the trees, it is like killing the elders, adults, and children to replace them, entirely, with infants. When a plant or animal species has gone extinct, it is like the death of an entire family.

Read more here: The Forest is a Village    And this one from Greenbiz:  How a city can be more like a forest