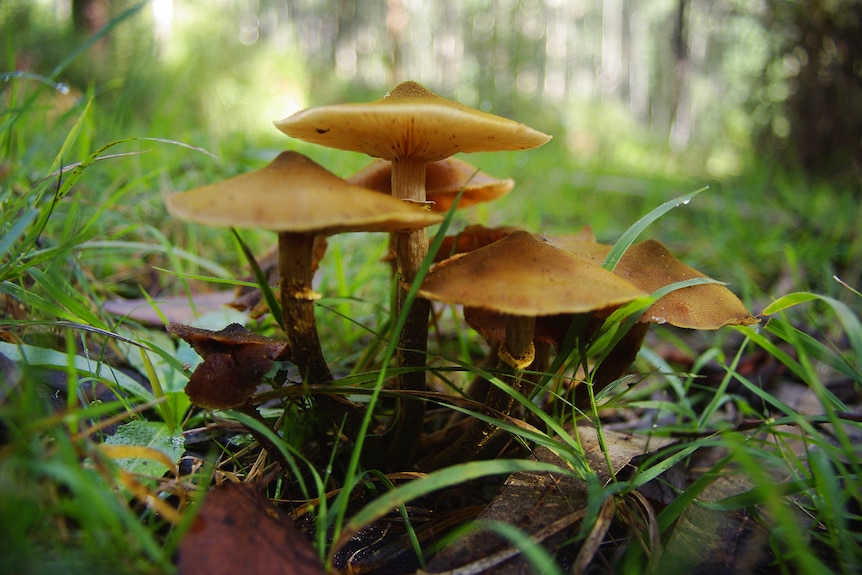 The science is continuing to build about the importance of fungi in nature.  As we wander about on the surface of the Earth, we are for the most part oblivious to myriad actions taking place beneath the surface out of sight and out of mind, but critically important to everything happening above.

In: Trees and fungi are the ultimate friends with benefits, Gemma Conroy (ABC Science, Wed 3 Aug 2022) reports on how “…. some of the quietest life forms are having some of the liveliest conversations.”

While it’s easy for us to become immersed in the soundscape of chattering bush buddies that we encounter on a walk in the bush, underground it’s what you could say as being ‘out of this world stuff’ at least as we’ve come to understand it thus far.  We knew it was busy with earthworms and the like, but this is taking things to another level.

Gemma writes: “Trees might seem like the type who prefer to keep to themselves, but beneath your feet they are busy forming secret relationships with vast networks of underground fungi.

Big, old trees rely on this “wood-wide web” to shuttle nutrients to their younger neighbours, while others use it to send chemical signals that warn nearby trees of looming threats, such as diseases and pests.

“The symbiosis is important for all aspects of plant growth, but also the diversity we see in our landscape,” says Ian Anderson, a fungal ecologist at Western Sydney University.

It’s a friends-with-benefits arrangement that’s been around for millions of years, but researchers are only just beginning to unravel the secrets of how trees and fungi interact, particularly in Australian ecosystems, says Tom May, a mycologist at the Royal Botanic Gardens Victoria. 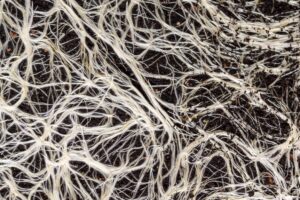 Roots that wear socks? If you could shrink yourself down and dive beneath the forest floor, you would encounter a wonderland of miniature life forms working hard to keep the ecosystem running.

Among the busy mites and microbes, you’d be surrounded by dozens of tree roots wearing ghostly white “socks”.

These sock-like coverings are known as ectomycorrhizal fungi, the most common type of symbiotic fungi in forests.

The friendly fungi reach into the soil with their hyphae — long, cobwebby filaments that are thinner than a strand of human hair.

Trees are generous hosts, providing a home for dozens of species of mycorrhizal fungi that each have a role to play.

But the conversations between Australian native trees and their mycorrhizal fungi are still largely shrouded in mystery.

Over the past few years, Dr Plett and his team have been digging into the nitty-gritty of how mycorrhizal fungi help eucalyptus trees thrive and communicate.

But not all underground fungi are interested in making friends with trees.

For instance, the Australian honey fungus (Armillaria luteobubalina) is the main culprit behind root rot in eucalyptus trees, and can spread from tree to tree like an underground wildfire.

Given that roughly 50 species of Australian fungi are now on the International Union for Conservation of Nature (IUCN) Red List of Threatened Species, cataloguing our native fungi and understanding their role in Australia’s forests is more important than ever, Dr May says. This means turning our attention to the underworld, instead of the heavens.

“It’s interesting how people are really captured by cataloguing the stars … there’s nothing going on out in space that we need to worry about,” Dr Tom May, a mycologist at the Royal Botanic Gardens Victoria, says. “But if we don’t crack on here and get an understanding of what we’ve got, in 50 years’ time it could be gone.”

Read the full story here: Trees and fungi are friends

A time for stalling