Land care is a concept that’s been around for eons.  Indigenous people did it as a matter of course.   Living with the land, considering themselves part and parcel of the land, care for the land was an extension of their ways of living.  With the settlement of Australia by the British, came all the issues of overgrazing native grasses, land clearing for broadacre monocultural cropping, ploughing the soil, leaving it exposed to the elements, watching it get blown to New Zealand and washed into local creeks and rivers.

It’s a sad and sorry tale, that led to what is now the modern formalised Landcare movement attempting to right some of the wrongs done in the name of progress and economic growth.  In tandem with land is water.  While we were wrecking the land we were over extracting water, selling it off to the mining industry and big cotton.  Enter Water Keepers, an idea that had it’s beginnings in the US.  This story: A new riverkeeper becomes a voice for the conservation and protection of the Yarra River, by Smriti Daniel for Blueprint for Living, ABC Arts, 18 Apr 2022, rings true for us.  What makes it all the more relevant is our project to speak up for the waterways of Munibung Hill.  Much of this story sounds very familiar to the challenges faced by waterways in NSW, the Hunter and around the creeks of Munibung Hill.

Vina Chubb has been doing her best at citizen science, keeping an eye on the wetland waterbirds and their habitat over the last three years.  We have now documented this into a short book titled Biddabah Creek, protecting waterbird breeding areas.  See the flipbook under Resources.

Smriti Daniel writes about the work of Charlotte Sterrett, and why it’s so vital to reconnect with one of the sources of our being, that is integral to most everything we do.  There are lessons for us that we could adopt locally in the interests of raising levels of awareness – as Sterrett says, being a voice for the river and all her other than human life forms.  Read on ….

As befitting a riverkeeper, Charlotte Sterrett lives just three doors down from the waters she watches over.
On a warm, clear day, there’s a swimming hole in the Yarra (Birrarung) river she likes to go to with her daughter, partner, and dog. The bank there isn’t too steep, and the current is gentle. The air is filled with the sounds of birds and the wind in the trees.

“The water looks brown because of the suspended particles, which are very fine and come from the clay that’s in the earth around us,” Sterrett told ABC RN’s Blueprint for Living.

Then there’s the question of pollution. Sterrett avoids going swimming in the days after a storm when runoff can contaminate the river with rubbish, fertiliser, and chemical runoff.

“The whole of Melbourne is a drain — wherever you drop litter or a cigarette butt or spill something that you shouldn’t, it’s probably going to end up in the river.”

Simultaneously, the green banks of the Yarra are under threat. In the upper reaches of the river, indigenous vegetation has been cleared away to make room for agriculture and golf courses, while in the lower Yarra, large apartment buildings are among developments causing concern.

Sterrett visits the occupants of these apartments to talk about what they can do as friends of the Yarra. This could include restoring or regenerating the sections of the bank that are closest to them.

“So, instead of just looking at the river and using it as an amenity, our aim is for them to know the river better, so they become advocates themselves, their own riverkeepers.”

It sets out to “wilip-gin Birrarung murron” (keep the Birrarung alive) and underpins the ambitious Yarra Strategic Plan of 2022, which offers a 50-year community vision and outlines key objectives for the next 10 years.
Sterrett believes that if these plans are to succeed, we must first change the way we perceive the river itself.
“We have so much to learn about natural resource management and our relationship with nature from traditional owners.”

Today, there are 16 councils that the river runs through, but the Wurundjeri Woi-wurrung have long seen the river as “one living and integrated natural entity”.
“It’s not just about individuals doing the right thing, it’s about communities, local, state and federal government, along with the international community, doing all the right things and working together,” Sterrett says.

“More than that, it’s about seeing ourselves as not separate from nature, that we’re part of this big picture.
“For too long we’ve seen ourselves as free to dominate nature, to use and exploit as we want and we’re coming to the end of that – if we don’t change that there will be an end for humankind as we know it.”

Along the riverbanks.
Vitally, this means going beyond the river to its banks. For Sterrett life along the Yarra means being on intimate terms with the creatures that call it home. 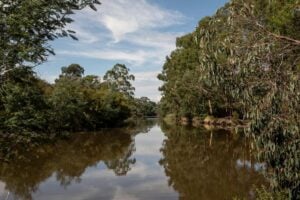 The banks are thick with life: the microbats that use the river corridor by night and the thousands of grey-headed flying foxes that dispense seeds and pollinate plants; bluetongue lizards and dwarf tree frogs; small, brightly coloured eastern rosella nesting in tree hollows and koalas feasting on the eucalypts along the river’s upper reaches.

Communion with nature.
When she’s most worried, Sterrett finds herself turning to the river as if it were an “old friend”.
“It makes me feel as if I’m able to deal with the world’s problems … when I’m by the river, I feel like it’s all going to be OK.”
This quality of hopefulness might even be essential to succeeding as a riverkeeper.

“You have to be realistic about the challenges and say: ‘This is the vision I have for the future of the river, the people who live by it and the animals and plants,’ and then you can work towards that vision. That’s important – without hope, you would just give up.”

Sterrett has been inspired by how many people have turned toward the natural world for comfort amid the stress of COVID-19.

The full story is here: Riverkeeper is a voice for the river.

An underground movement of the most helpful kind