They have a reputation for being spooky.  Being dark in colour and hanging upside down and being nocturnal, all add to the mystery of these creatures.  We know very little about the bats at Munibung Hill.  There are reported to be threatened species living there and being of the micro bat variety, they are elusive little animals.  But they are important for their pollination services.  In this article:  Eek! Bat Populations Are Shrinking. Here Are A Few Ways to Help, (Yes magazine, October 31, 2019)  Alexa Peters,    we learn that these tiny mammals are essential to human comfort; without them, we wouldn’t have things like avocados, chocolate, and tequila.

While bats may well be featured in and associated with many aspects of Halloween, bats are extremely important as real life species contributing as they do to ecosystem services.  In spite of the efforts of many dedicated bat lovers, they remain largely misunderstood.  Even International Bat Week. has done little to raise their public profile.  Says Peters:

Truth be told, bats are essential to humans; without them, we probably wouldn’t have such things like avocados, chocolate, and tequila. Of the more than 1,390 species of bats throughout the world, Bat Conservation International considers many of them “keystone species,” because of their vital roles as seed dispersers and pollinators in our ecosystem. 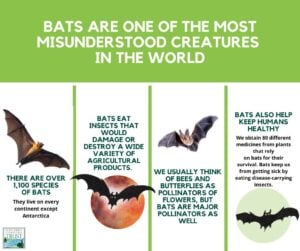 Within an Australian context there are local connections such as: Hunter Wildlife Rescue   and  Judith Hopper  (Facebook site), as well as Australasian Bat Society . Read the full story at this link:  Bat populations are shrinking.