Picture: Connecting remnant bushland with larger areas is critical to the survival of invertebrates, small mammals,  and reptiles that live within these trapped / isolated areas.  Wildlife crossing overpasses such as this one in Brisbane could be constructed over Hillsborough Road.

Areas of land that are isolated from others, are often seen as prime sties for new development.  After all, what’s the point of protecting the area if it has become an island with supposedly little conservation value?  This kind of thinking demonstrates a lack of hindsight and foresight. Remnant bush land often contains threatened species that have nowhere else to go – trapped and imprisoned, without their rightful freedom of movement that, if it was applied to us, we would consider an appalling situation.

So remnant areas such as the one in South Cardiff sandwiched between Knight Street, Crockett Street, and the Hillsborough Road commercial area, are hotspots for species such as the Bandicoot and Swamp Wallaby.  This area is, in reality, a part of the larger Munibung Hill landscape – being within the Awaba Tuff zone – except for being sliced off by Macquarie Road on the north east side of Lakelands. 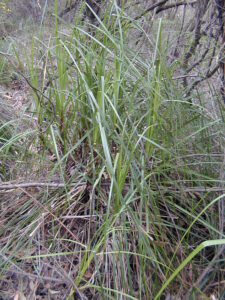 Wildlife crossings over Macquarie Rd and Hillsborough Rd would help protect and secure local species, such as Gahnia (Swordgrass), that provides protective cover for small mammals such as Bandicoots.  It is critical to save remnant bushland that can be ‘last-stand’ refuge areas for these native treasures.

A goal for our city planners must be the maintenance of connections within and between areas of bushland for the health of all species, including the human species. We continue to ride rough-shod over all others choosing to prioritise profits over people and planet (a David Attenborough assessment). This has to change and change quickly, if we are to leave a legacy worthy of our presence in 2021.

There are many examples of state governments who have made the decision to provide opportunities for wildlife to expand their range, thanks to the installation of appropriate infrastructure.

There’s nothing new about these and so let’s factor them into urban planning as a standard, rather than an add-on or after thought. The examples in the document at the link, demonstrate what is possible.  They would make great projects for the three tiers of government to get involved with.

We are in contact with LMCC Mayor Kay Fraser and her fellow Councillors, Independent Member for Lake Macquarie, Greg Piper and Federal Member for Shortland Pat Conroy outlining the necessity for these infrastructure projects to be supported.  We’ll keep our members informed on their responses.

When sound science and vision combine for the common good

Who speaks for the koala?