With such a long heritage trees elicit a plethora of emotions especially for people living in towns and cities.  Shade and shelter for some, falling branches and messy leaves for others.  Trees belong in forests, not in the suburbs as part of a diverse streetscape – at least you’d think that was true when glancing across a new housing sub-division.  The narrative about trees is in need of some good science. Ecologist have been banging on about the value of trees for decades, but only now is their advocacy gaining momentum with trees getting the attention they deserve. 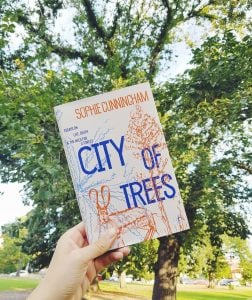 Enter people like Sophie Cunningham, author of City of Trees: Essays on Life, Death and the Need for a Forest.  Cunningham says we need:

“…. to advance the political action required if trees are to survive the anthropocene in a meaningful way. But there is more to it than that. I’m also responding to my genuine sense, when spending time among trees, that trees have personality. That they are, in a way, sentient. Sure, that “personality” is sculpted by weather, soil and light, and by the creatures that live in and around it.

….  I see it this way: trees need strategic thinking in these difficult times, and also they need friends.

…. Trees are not simply larger versions of their younger selves. Up to 30 per cent of our mammals rely on cavities found only in trees that are hundreds of years old. Some marsupials and birds get so attached to the particular tree they live in that they will stay in the place the tree existed before it was logged, much as humans continue to live next to the remains of their house after a disaster strikes.

…. The work of large old trees continues for decades or even centuries after their death. Their reign is long.

…. Some trees are the equivalent of a city, so many millions do they support; such massive infrastructure do they provide.    Others are more like towns; some are no more than a beach shack.

…. Less than 10 per cent of Australia’s pre-settlement forests remain.   Under business-as-usual management, large, hollow bearing trees will decline to less than one per hectare by 2067.

For more click on the link:  A love song to threatened old growth trees.

Energy efficiency needs to be a ‘first fuel’ priority