In the drive to reduce ‘waste’ and having once perfectly good and functioning products end up in landfill, the push to introduce Right to Repair legislation and practice Circular Economy principles has gained momentum.  Governments and companies are taking a keen interest and in some cases reviewing their internal policies to reflect these ideas.  But in this story: If the UN wants to slash plastic waste, it must tackle soaring plastic production – and why we use so much of it, authors Sabrina Chakori and her colleagues (The Conversation, March 23, 2022) question the motives, pointing out what their research notes are the flaws and how we have come to be so hooked on plastic as a convenience ‘essential’.  In short, they are saying it won’t work, and why.

They begin by noting what all good caring people do when they come across some rubbish on the footpath – pick it up. We feel good about this act of kindness to the earth, but looking around and seeing more, we despair and walk on.  As they rightly point out: “It’s much more than you could pick up.”  So here are a few extracts … with the conclusion that, de-growth, not recycling in isolation, is the preferred choice, if we are serious about petrochemical plastic ‘waste’.

Sabrina Chakori, and colleagues: ‘You pick up a piece of plastic litter from the beach, and get a small buzz. You’ve done something for the environment. But then you look around, and see plastic everywhere. It’s much more than you could pick up.’

While that sounds positive, focusing on pollution is missing the elephant in the room: production. Why is more and more plastic being produced, with some ending up in forests, rivers and oceans near you?

Our research has shown that to actually make a difference to the ever-growing amount of plastics in our oceans, our soils and our bodies, we must focus on why our societies use and throw away ever more single use plastics.

The answer lies in our systems. If you’re a time-poor parent, stressed by juggling kids, work and the mortgage, it can be much easier and faster to reach for heavily packaged ready-made meals, or get dinner delivered in many layers of plastic.
…………………………………………………

Our research has shown mainstream approaches such as the UN resolution are ineffective and even counterproductive.

If we want to make a dent in the major problem of plastic pollution, we have to make systemic changes.

Why? Consider recycling and the notion of the circular economy, often held up as an answer to plastic waste. The issue here is that plastic degrades every time it is cycled through. Not only that, but recycling itself is often highly energy-intensive with its own set of environmental impacts.

Recycling only delays the final disposal of plastics. Similarly, the concept of a circular economy is only put into practice when profitable.

Could we switch en masse to alternative disposable materials, like bio-based packaging?

Alas not. This isn’t the solution either, as these products still have significant social and environmental impacts.

Both recycling and switching to bio-based packaging are drawn from the technocratic greenwashing playbook, in which we look to technology to let us keep living in an unsustainable way.
…………………………………………………..

We believe the central issue stems from the growth-at-all-costs capitalist system. 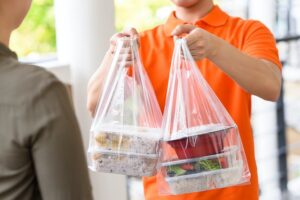 Consider: packaged food is sold as “convenient”. Why do we need convenient ready-to-eat meals or those with minimal preparation, like frozen dinners, instant noodles and fast food? Because we are time-poor.

Why are we time-poor? Because in our fast-paced capitalist economies, people need to fit food preparation around their inflexible paid labour, which may often require long hours or fitting into a casualised system.
………………………………………………………..

Waste is just a symptom

We do not hold out great hopes for the new UN agreement on plastics, based not only on the failure to address the root causes but also the poor implementation of previous climate commitments and other international environmental agreements such as e-waste management.

Proposals to reduce plastic pollution which skim ove the root causes will do very little to reduce our overall use of plastics and alleviate the significant damage they do to our societies and the environment.

If we are serious about reducing the damage, we must look at deeper solutions, One might be transitioning towards a degrowth society, which would help us re-localise food systems.

In a degrowth society, we would gradually shift back to local food production, which would reduce the globalisation of food and shorten supply chains. That, in turn, would slash the need for packaging.

As noted over the years, Munibung Hill is not part of the growth-at-all-costs way of life.  She has matured, and left to her own devices would be practicing what is known as a Steady State Economics model, having reached a sense of equilibrium with the species residing there.

Get the full story here.