Sustainability, living within planetary boundaries, only one earth, there is no plan B.  These all suggest that we need to find new ways to live as it we intended to stay, rather than squandering the earth’s natural resources as if there was no tomorrow.

Smithsonian geographer Doug Herman proposes a return to sustainable solutions, based on the path laid down by Indigenous peoples for millennia. In: A New Way for Stewardship of Mother Earth: Indigeneity (Smithsonian Magazine, September 30, 2014) Herman sets out the case for this one planet living idea, saying we should take our cues from indigenous peoples who have thousands of years of experience, living in harmony with the natural world.

A central tenet of his case is that we are nature, not some separate entity living an existence independently of the plants and animals with which he would say we co-exist – whether or not we fully understand or appreciate what the implications of that might be.  Writes Herman …

“The sail plan we’re on is not sustainable.” These are the words Nainoa Thompson, navigator of the Hawaiian voyaging canoe Hōkūleʻa, used to explain why that canoe was embarking on its current voyage around the world: the “sail plan” of modernity is destroying our ability to live on this Earth, and the time to act is now. As a microcosm of the Earth, the voyaging canoe is a perfect model and metaphor for how to live on this planet. There is even a Hawaiian proverb, “The canoe is an island, the island is a canoe.” The same principles apply in both cases, and for the Earth as a whole: we are limited to one vessel, with nowhere else to go. What we have is all we have. How do we make it sustainable?

He then goes on to say …
The Protestant Reformation, the Enlightenment and the Scientific Revolution changed the way the Western world understood itself and its relationship to the Earth. At the outset of the Scientific Revolution, it was important to separate science and intellectual thought from the ideological constraints of the Church. But from there, a new tradition of reason and rationality took hold. One might presume that being “rational” is a good thing. Unfortunately, the specific kind of rationality—which I call rationality with small “r”—is the root of our problem.

Val Plumwood, says Herman put her finger on the problem …
As environmental philosopher Val Plumwood put it, reason was taken as characterizing the authentically human, creating the “supposedly sharp separation, cleavage, or discontinuity between all humans and the nonhuman world, and the similar cleavage within the human self.” The authentic human self became defined not as part of the natural, or physical or biological realm (or at best, as a special and distinct part) but sharply divided from those realms. Nature is not only alien and oppositional to humanity, but usually hostile and inferior.

The result is what environmental scholar Carolyn Merchant called “The Death of Nature,” and sociologists such as Max Weber and Theodor Adorno called the “disenchantment of the world.” It is a reductionism that poses a “mindless meaningless materialist universe open to endless unrestricted manipulation and appropriation: nature is the suppressed slave collaborator—a mere resource, or transparent enabler of projects, ” wrote Plumwood in 2009. As the Industrial Revolution picked up steam in the late 18th-century, it was essential that nature be understood not as animate, but raw materials for mass production.

Add to this a new emphasis on money as main measure of human activity and it’s little wonder we have lost our way – at least if we are of the belief that nature shows the way, provides the basis for our lives and communities.

This “rationality” also brought in the model of Homo economicus: economic man. Rather than focus on the community, the economic man seeks to do whatever he can to maximize his own personal benefit. This is called “economic rationalism,” and is the foundation of most modern economic theory. It’s best exemplified by Garrett Hardin’s Tragedy of the Commons, which we are indeed facing now. 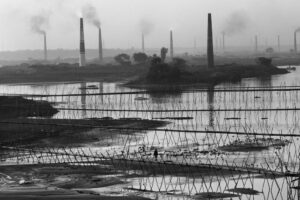 “All of our ancestors would have found it horrific if they could see us now. As it ignores that on which our very survival is based, it is actually not rational at all.” Collections of the Smithsonian.com Annual Photo Contest, Ariful Haque

It is not “romantic” to say that we are interconnected with and part of the Earth—to use the Lakota phrase “all my relatives” in referring to the soil, the rocks, the water, the air, the plants and the animals. This is science. We are one with our environment. The boundary between our bodies and our environments is not just permeable, but a blur of movement as components from Earth, Air, Water and Fire cycle through us. We partake of, and contribute to, the hydrological cycle, atmospheric circulation, the nutrient cycle and the mineral cycle. We embody, and return to, the animal, vegetable and mineral kingdoms. We are what we eat, drink and breath, and we share those elements with the rest of the Earth. Even our DNA tells us that we are related to all other species on the planet. The Lakota phrase “all our relatives” becomes a scientific reality when we consider this. And when we think of the world as “relatives” rather than “resources,” we will treat it differently.

Is it really rational to treat the earth in such a cavalier manner?  What can we learn from adopting an indigeneity approach?  Herman offers five values.   And then concludes by saying that:

Knowledge should be about putting our best values into practice, NOT about giving everyone the freedom—and incentive—to pursue their own self-interest at the expense of others. If the Anthropocene tells us anything, it is that the Age of the Individual is over. We are all in the same boat, and that boat’s getting smaller, and leakier, and more full of trash. And that’s just not rational.

How might the five values relate to Munibung Hill, with her long indigenous connections and even longer geological history – spanning 251 million years?

Read the full story here: Five values as part of our stewardship for the earth

Ecological recession that we must urgently address