With an eye catching display of flowers the Long-flowered Mistletoe (Dendrophthoe vitellina) is in full bloom across Munibung Hill right now. Mistletoe plants are semi-parasitic on their host tree and often only grow on a particular type of tree, such as Banksias, Acacias or Eucalypts. This mistletoe can presently be seen flowering on some eucalypt trees across the hill.

Are mistletoes friend or foe? They provide food and shelter to a vast range of birds, mammals and insects, yet now infest trees in plague proportions in some parts of Australia. This is a question posed by Abbie Thomas in Misunderstood Mistletoe (ABC Science 2004).  “Mistletoes, air-born parasitic plants which live off the sap of their hosts, thrive in almost every type of climate and soil in Australia, and are found everywhere except Tasmania.

Those living on the coast tend to flower in spring and summer, but many mistletoes are at their peak of flowering in March, particularly in the drier inland areas. These bizarre plants are easy to spot when in bloom. Their bright antler-shaped orange or red blossoms stand out against the dark foliage, advertising their nectar to birds.”

Are parasitic mistletoes “just another burden for an Australian landscape already under siege from drought, dieback and clearing for agriculture? They are poisoned, pruned and even shot at in their thousands, and are often the first thing to be removed in forest thinning operations.”

As with all things, there are two sides to every story and it is no different with mistletoe. Recent research suggests that mistletoe, far from being an environmental scurge, plays a central role in maintaining ecosystems. “A lot of people hate it – many of my colleagues come up to me at conferences and say they had no idea it was native, that they didn’t realise it doesn’t kill trees. It’s that world parasite that gives it a bad name,” says Dr David Watson, a plant biologist from Charles Sturt University in Albury, NSW.  To read the full story check out this link. 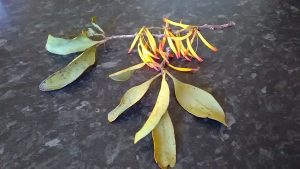