QUOTE
“Population growth contributes to all the pressures described in this report. Each person added to our population increases demand on natural resources to provide food, shelter and materials for living.” 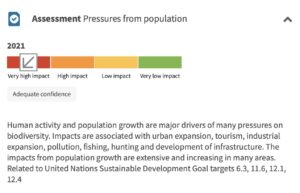 FEATURE
This pioneering economist says our obsession with growth must end
New York Times Magazine, 17 July 2022 – [Herman Daly; ecological economics]
The great Herman Daly is interviewed by David Marchese for the New York Times. It is not every day a mainstream organ allows a serious discussion questioning growth.
https://www.nytimes.com/interactive/2022/07/18/magazine/herman-daly-interview.html

Time to turn our attention to the underground world of fungi

Lights off for moths