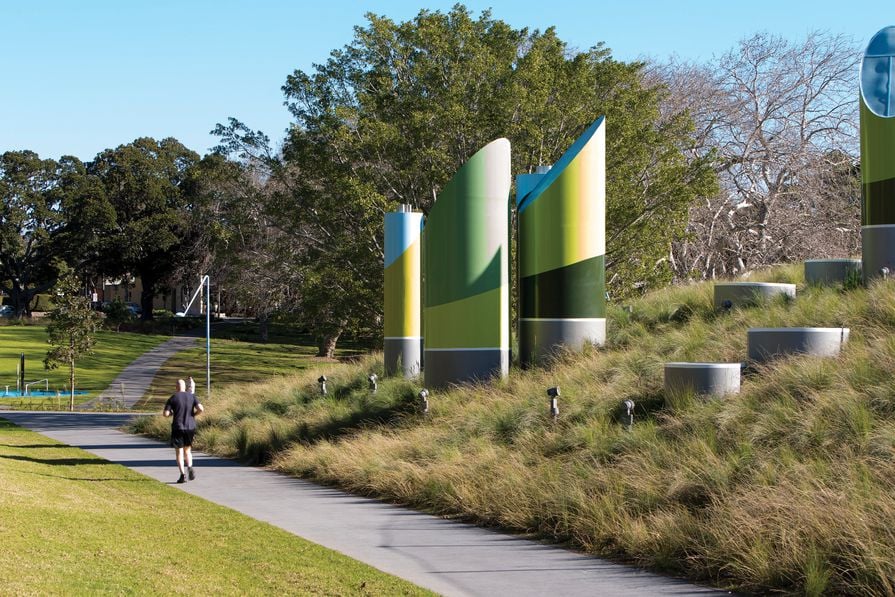 In the case of the seemingly humble native meadow, planting design has been used to engage with an even more neglected aspect of planting – that of culture.

The native meadow in this location can be read as a subtle argument for the validity and place of endemic planting within the confines of the historic, largely Victorian-period parks of central Sydney, particularly in its siting along a major view line into the park. From Cleveland Street, the view to a gently rolling traditional lawn is now framed by the sometimes brown, sometimes golden native seed heads, adding a layer of complexity both to the park’s overall planting and to the range of ways we view the appropriateness of grasslands within our parks.

Incorporating native grasses in public spaces required a shift in attitude regarding maintenance, a questioning of the urge to mow and trim and a reconsideration of the idea of grassed areas as ecologically and temporally potent spaces, rather than static swathes of green. Potential grassland species were tested on site in patches, trialling issues of resiliency, speed of growth and competition. In some cases, unexpected plants such as Wahlenbergia stricta (Australian bluebells) emerged, suggesting a layered history lying dormant in the site’s seed bank.

The idea of un-mowed grasses proved surprisingly contentious. When I spoke with Sue Barnsley she described calls received by the local council in which irate taxpayers demanded to know why the “lawn” was going un-mowed, the park lacking adequate maintenance for its prominence. The calls resulted in the addition of a sign and a naming of the space, “native meadow,” to communicate that the “loose” effect of the sometimes browning, blowzy windblown grasses was intentional and designed.

Naming, even reluctantly, is important.3 The term “meadow” communicates a pastoral, romantic vision. Prefacing it with “native” as an adjective seems an attempt to make the effect of the messy (in certain opinions) plantings palatable, by equating endemic grassland with a historic, less threatening and more familiar typology.
REVIEW |  David Whitworth  12 Oct 2017

More at these links: Law-n and Order  and:  Do not mow

How the humble mushroom can clean up toxic waste