The chorus of voices supporting stricter controls on domestic cat movement is mounting, getting louder and finally being taken more seriously. This is thanks, in part, to the consistent and persistent campaign, that quite frankly won’t cease until all domestic cats in Australia are kept out of harms way.  In other words, out of any place where they could cause injury and death to native animal species whether they be in bushland or just out the back door of their ‘cat parents’ house block backyard.  Native wildlife, where ever they reside deserve complete protection from these hunting animals.  This post contains a story by Daniel Pizzirani reporting on current events in three states plus the ACT.

In: ‘Not hard’: Australians hit with cat curfew following more than a billion wildlife animal deaths, Daniela Pizzirani  March 22, 2022 (News Corp Australia [NCA] – NewsWire) writes: ‘Some Australians will face up to $1600 fines if their cat is found roaming the streets come June, as councils roll up their sleeves to put an end to native wildlife killings.’

She explains that: Local councils across Australia have tightened their grip on cat owners, serving up hefty fines to residents in pockets of Victoria, South Australia, Western Australia, and the Australian Capital Territory.

Some residents will face up to $1600 dollar fines if their cat is found roaming outside after more than a billion native wildlife animals were killed by the animal last year.

The Canberra council has announced all cats will remain indoors from mid-2022 or their owners could face $1600 fines, while Bendigo residents have been urged to keep their cats within their property or pay $120 to reclaim them from shelters.

Adelaide Hills council has banned felines from being outside from 8pm to 7am, while Cats in Fremantle are now banned from public areas.

The new rules still need to be signed off by WA state parliament, but if passed, will bring cats into line with dogs and effectively see them housebound unless they are on a lead.

Cat protection CEO Kristina Vesk told NCA NewsWire the local council response is “patchy” in areas across the country and believes councils and owners could do more to protect native animals and their own pets.

“These [restrictions] are put in place to keep our wildlife safe, and protect our cats from road accidents, infectious diseases and injury from other animals.”

“People need to be considerate of where they live, especially if they back onto parks and nature reserves and things.

“Keeping your cat inside is good for their health and safety.” 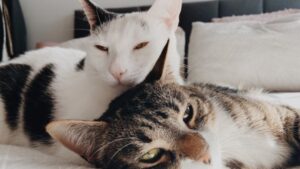 Cat experts have urged residents to keep their pets indoors to ensure wildlife are not attacked.

Fremantle councillor Adin Lang told the ABC he thinks – like dogs – cats will soon be inside.

‘Our future generations will look back and say to us, “You guys let cats roam around Australia, eating all our wildlife all these years?” he said.

“Pet cat owners are not always as aware of their pets’ movements as they think they are,” she said.

From a Munibung Hill Conservation Society (MHCS) perspective, we are pleased that: The proposals have been welcomed by cat owners and breeders, who want to see more focus on responsible pet ownership.

While this is long overdue, it ignores the reality that well worded sentiments don’t alter the fact that pet owners / minders / parents, as Sarah Legge points out, in many cases don’t get it. To be blunt, they are either naïve, in denial, have a don’t care or lackadaisical attitude or they believe their cat has the right to roam unrestrained.  Whatever the case, they are all unacceptable to MHCS. Therefore, the only way to deal with the harm being done, is to have a one size fits all, which is cat containment 24/7. Only then will we have any hope of reducing the kill rate caused by cats.  Only then will we be able to genuinely target wild feral cats and over time reduce their numbers through targeted cat reduction programs.  It can’t come soon enough.

The need to protect the planet from ourselves and to remember, we are alive, our toaster is not