Lives lost to ferals continues to mount by the day, let along the week, the month, the year.  And that’s on top of lives lost over the last ten, twenty, thirty and more years.

For how much longer this can go on without some more decisive action to bring the reign of terror under control, leaves those working to save Australian native species, flabbergasted, and yet they keep on doing research as if the need for more gruesome data on top of the already distressing numbers was necessary. The bias against native animals over domestic pets is hard to fathom.

In this story by environment reporter Nick Kilvert: Foxes and cats are knocking out Australia’s wildlife with a devastating one-two punch (ABC Science, Wed 16 Mar 2022) he writes of the onslaught of feral animals on the iconic species that face: ‘The combination of feral cats and foxes [that] is inflicting a staggering annual death toll on Australia’s native wildlife.

Their ability to take down different prey, and their capacity to flourish in different habitats, means they are putting immense pressure on the survival of a number of native animals across a large portion of the country.

And where their diets and range overlap, they’re delivering a one-two punch to some of our most vulnerable species. 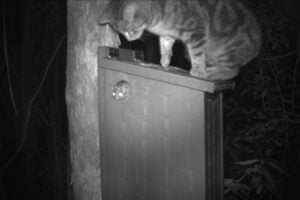 They’re some of the key lessons from new research published in the journal Diversity and Distributions today and supported by the Threatened Species Recovery Hub.

According to the findings, cats and foxes collectively kill in Australia each year:

The findings highlight the urgent need for greater control of invasive species in order to curb Australia’s worrying decline in native wildlife, the authors said.

“We need to deal with this problem of foxes and cats,” said lead author Alyson Stobo-Wilson from Charles Darwin University.

The prey species that fall within the size range and diet of both cats and foxes — things like bettongs and quolls, some birds and reptiles — are getting hit from both sides, according to study co-author Sarah Legge from the Australian National University.

“They’ve got different size preferences that overlap and the poor buggers in the middle are getting a double whammy,” Professor Legge said.

While there’s no “silver bullet” for controlling cat and fox numbers, ecologist John Read from the University of Adelaide, who wasn’t involved in this study, says there are some things that work well.  One key approach is for councils to enforce measures to keep domestic cats contained.

“Management of domestic cats is a huge issue,” Dr Read said. “Keeping cats contained helps prevent those environmental and health impacts and stops them getting out and breeding more feral cats.”

We recommend you read the full story here.