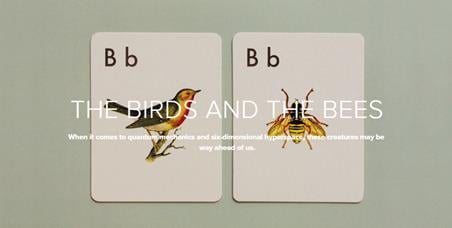 To acknowledge an accomplishment is a gesture most often reserved for human acts of achievement. That a person deserves to be recognised.  Perhaps, not unlike the old saying that we should give credit where credit is due, it should be applied to other-than-human species as well, plants and animals – in this case, The Birds and the Bees. In this article by Chris Harrigan (Smith Journal, Volume 19, Winter 2016), he writes: When it comes to completely incomprehensible science, these creatures are way ahead of us.  Some extracts follow …

Of all the head-scratching theories scientists have thought up over the years, few have caused as many headaches as quantum mechanics.

It’s the branch of physics that focuses on the small stuff – atoms, particles, electrons – but it manages to make some pretty big claims about the nature of reality. For instance, according to quantum mechanics, particles can move in many directions at once, atoms can spin clockwise and anti-clockwise at the same time, and cats in boxes can be both alive and dead.1 (Google ‘Schrödinger’s cat’ if you’re looking for a good time.)

Quantum mechanics is so surreal that Albert Einstein – who more or less came up with the idea in the first place – ended up arguing that it was too illogical to be true. When the most celebrated brain on the planet thinks an idea (his own, no less) is too weird, you know you’re dealing with some complicated stuff. But while humans struggle to understand its slippery logic, it turns out some far lesser brains are able to grasp quantum mechanics rather well; birdbrains, to be precise.

According to recent studies, birds – from the mightiest hawks down to the most pathetic pigeons – might actually be using quantum mechanics to help them navigate as they fly across the planet. Literal birdbrains doing theoretical physics might sound like a plot from and X-Files episode, but the idea is gaining some serious traction in the (admittedly small) Venn diagram where physics and ornithology overlap.

I am prepared to believe damn near anything when it comes to migratory birds. 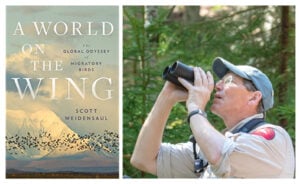 Scott Weidensaul has followed these developments closely. A natural history writer from Pennsylvania, Weidensaul has spent the better part of his life studying, drawing, capturing and otherwise daydreaming about birds. He’s particularly interested in working out how they manage to fly around the world without ever consulting a map.

The idea that birds can detect something as small as a single electron might seem hard to believe, but Weidensaul isn’t fazed. “To be honest, I am prepared to believe damn near anything about migratory birds at this point. They’re using quantum entanglement? Okay, sure. To me, that’s not necessarily any more staggering than the notion that a bird flying down the centre of North America can hear the waves of the Atlantic Ocean in one ear, the wind blowing through the high passes of the Rocky Mountains in the other, and the rumble of volcanoes and earthquakes in the volcanic mountains in Mexico. It’s all equally incomprehensible.”

“The smallest sparrow picking up crumbs underneath an outdoor café can see the world in ways that would leave us absolutely dumbstruck. Travelling through the earth’s magnetic field and seeing it change, it must be amazing – like the Aurora Borealis, though more beautiful. The most common bird on the street can see that, and I can’t. I wish to god I could.”

1 A quick note: we’re simplifying things a tad here. Atoms don’t actually spin, strictly speaking, though scientists seem to agree that spinning is a useful metaphor to use when explaining ‘atomic superstates’.

**It is thought the expression was probably coined by Samuel Adams in a letter (October 29, 1777), which put it: “Give credit to whom credit due.”   It is sometimes put, give someone their due, as in We should really give Nancy her due for trying to sort out this mess.

Read the full story at this link:  The Birds and the Bees

A gut friendly story about the economic value of trees

A shift in thinking to benefit the next generation