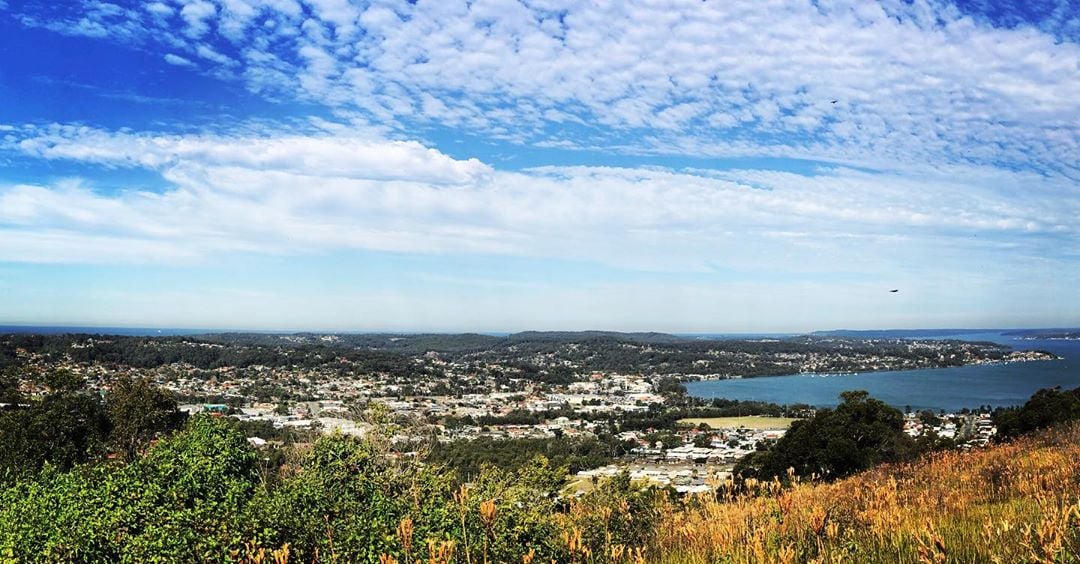 Our occasional series of stories where people reflect on their visits to Munibung Hill, includes some history of the Cardiff village as it was in those days.

Julie Graham (nee Elwell) lived in May Street, Cardiff in the 1950s.  She was eight years old at the time.

Munibung Hill was a prominent landscape that held many attractions for young people in the area. It was their playground and Julie was one of many – often with family and friends – who made the short trek to the northern end.

Julie used to walk up from May Street, sometimes along Lawson Road, but more often than not, along Blaxland Road, on the way to caves on the north east side.

There was a farmer who kept pigs who used to live in Lawson Road. At the bottom of Lawson road, near Granada intersection, there was an open cut coal mine.  Also nearby – near where NHS Hardware is now – there was an underground coal mine with a shaft for the miners to enter.  When it closed, I think the people involved might have started a clay pit, because a brick works opened in what is Ada Street – near the squash courts.

“When we went up past the piggery, my Uncle Arthur, who had a horse and cart, used to take us, family and friends (play mates), to explore the Munibung Hill area,” said Julie.  “We would set rabbit traps that we would revisit later in the day to ‘harvest’ the rabbits to cook for tea.  There were tons of rabbits, but I never saw any kangaroos.” They would also go hunting for mushrooms, blackberries and other wild food.

“We visited Munibung Hill a lot, all the way through my school years, up until I was about 14.  After that I left school and went to work at Rundles Menswear Store, where Julie was a tailoress – not a machinist, as other places called you,” Julie said.

Her sisters still live in May Street, Cardiff, and a brother who used to live in the area, were all regular visitors to Munibung Hill.

In Main Street, Cardiff, back in those days, there were a few basic shops – bakers, a general hardware store, a fruit shop, cake shop and a theatre, where Woolworths is now.  It had a great village atmosphere.

“From the bottom of May Street, there was a creek that had water in it most of the time.  Further away, across Macquarie Road, was Munibung Creek.  It had water in it a lot more than today and there was a platypus who lived in the creek and used to hide in a pipe when disturbed.”

“There were wild ducks and cranes.  There were lots of possums up in the bush, but not down where we lived around our house.  What we did have, was lots of wattle trees, they were everywhere. And sheep, on some properties around the Blaxland Road area.  And a sawmill, in Queen Street,” said Julie.

Back to the visits at Munibung Hill.  “We mainly entered from the north east end and walked along the eastern side on our way to Warners Bay to buy fish and chips and have a canoe ride from the jetty.”

From Julie’s memory there were no school visits to Munibung Hill, at least not from the Catholic School that she attended.

“It would be good to have the existing tracks and paths improved and the area made safer and more accessible for the community; especially for families.  It would be great for schools to be able to provide an area for excursions and study,” said Julie as we wrapped up our conversation.

I recommend a family walk up Munibung Hill, says father of four