One could be forgiven that we are about to discuss the rather sinister side of life, the shady characters that prefer to go about their business unbeknown to the rest of us.  This, however, is a somewhat different take on matters dark and mostly out of sight.  Not because that’s always how it’s been, but rather we have come to shun what was once very obvious, and still is when viewed within a context of other-than-human beings.  For the most part they do their ‘dark matter’ is full view, without any sense of embarrassment or urge to cover up, knowing that nature has her ways of reabsorbing this natural by-product of their body function back into the cycle of life. After all there’s life in this substance, and it contributes very much to life in the soil and therefore the life of the plants we animal humans eat. What goes ’round, comes ’round …

So here goes, it’s time to launch into the subject of poop of the human kind, hopefully with eyes wide open to the necessity of bringing some enlightened thought to the subject.  To help on this journey, let’s enlist the help of science journalist Lina Zeldovich.  In The Other Dark Matter: The Science and Business of Turning Waste into Wealth and Health, Zeldovich reports that while one culture might regard poop as trash, another will view it as treasure …

In Osaka, Japan, in the early-1700s, neighbouring villages fought over rights to city residents’ excrement. Much of Japan’s soil, sandy and poor in nutrients, produced feeble crops and supported few animals, so farmers depended on human fertiliser to grow food. And they were willing to pay for it. Often in exchange for a fee paid to each household, farmers collected what was called night soil at regular intervals to fashion into fertile compost. Poop was precious. Defecating at a friend’s house was considered an act of generosity – a gift.

Landlords earned extra income by retaining collection rights from tenants: Often the bigger the household, the lower the rent. As the city of Osaka grew, so did the value of residents’ waste, until prices climbed to such extremes in the early 1700s that some desperate farmers resorted to stealing it, despite potential prison time.

Roughly a hundred years later, London’s River Thames was choked with human and animal waste, emitting noxious methane, ammonia, and the rotten egg smell of hydrogen sulfide. Seemingly more sewage than water, the river’s banks swelled with refuse, interfering with marine navigation and making life miserable for many Londoners. Finally compelled to act, city authorities contracted boats to carry the sludge out to sea and dump it – at the approximate cost of a million pounds, or more than $170 million in today’s US dollars. 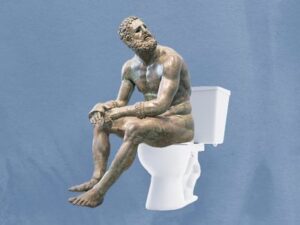 Why are these stories of human excrement so different? All is revealed in The Other Dark Matter

In this piece, The Past, Present and Future of Poop – The Other Dark Matter,  Jenny Morber  (University of Chicago Press, 12/12/2021) writes:

The Newtown Creek Wastewater Treatment Plant in Brooklyn, New York, “serves about 1 million people, [and] generates 2 million cubic feet of biogas every day,” the book notes, while in Washington, DC, the city’s sewage treatment plant processes the contributions of 2.2 million people into Grade A fertiliser that is sold in stores.

In the Pacific Northwest, scientists are working to turn the city of Vancouver’s poop into biofuel. When a program to convert algae into oil fell flat due to cost, scientists turned to cheap and abundant sewer sludge. Unlike fertiliser that must be transported back to farms, “poop-derived gasoline doesn’t have to travel anywhere. It can be used right next to its original source…,” Zeldovich writes.

The book’s final section details the use of human waste as a diagnostic tool in medicine, including the fascinating science and history of faecal transplants and how one patient’s impassioned speech changed the FDA’s trajectory for regulation. 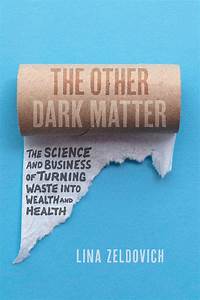 It would be easy for a book that focuses on obstacles to improving global sanitation, fixing the agricultural waste cycle, reducing pollution and improving health to resort to paralysing gloom. The Other Dark Matter does not shy from the enormity of the problems, yet suggests solutions are achievable, at scales from individuals to entire countries. Paced quickly with prose enlivened by the author’s on-location reporting and personal experiences, the book is far from a grim slog through the world’s sewers – it’s more like an exciting tour in a biogas-powered balloon.

“Moving bowels is one big equalising commonality that unites humankind regardless of ethnicity, color, religion, diet or traditions,” Zeldovich writes.

“Perhaps this generation won’t be ashamed of their organic power,” she adds. “They won’t think of it as waste.”

Jenny Morber works a freelance science journalist on an island near Seattle. Her work has appeared in Popular Science, Discover, Glamour and National Geographic, among other publications.

To read the full story, click on the highlighted link above.

At Munibung Hill, dark matter has been all the go for tens of thousands of years.  We can learn a thing or two from how nature has done her business – so to speak – without any raising of the eyebrows.  In Biomimicry, Janine Benyus, writes extensively about our need to consider nature as our best and most experienced teacher.  To not learn from her, is to turn a blind eye to the obvious.  For all the ingenuity of our technologies, the outsourcing of the treatment of a most basic biological procedure, may need some major adjustments, as we come up against nature’s limits and boundaries – that we seem intent on pushing against.

How not to be an invasive species. It’s time we became naturalised