Fungi between our toes is not pleasant. Known as athlete’s foot or tinea pedis, you could say, well it’s normal.  That is, the fungus is doing what fungus does when the conditions are right for their growth.  Not being such a healthy little life form on that particular part of the body we do what we can to get rid of it.

Trouble is, we are also doing what we can to get rid of it in places that we need it to be, because fungi is an essential for life on earth.

Being neither plant nor animal, according to Mark Fricker, a biologist at Oxford University, fungi form networks that represent “a third mode of life”. 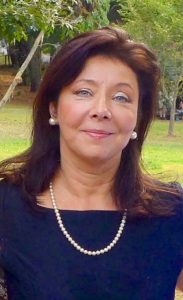 Annamaria Talas in If it weren’t for fungi we wouldn’t be here (Cosmos magazine, 7 November 2018) says: ‘Biologists traditionally divide life into single-cell or multicellular organisms.’

But fungi sit outside this description:

‘Like a brain, these networks are adaptive. They respond to the environment, allowing fungi to deploy nutrients where they are most needed, explore resources, combat enemies or make urgent repairs. They are nature’s most efficient and resilient network.’

‘They range in size from microscopic yeast to the largest organism alive – the honey fungus Armillaria solidipes whose underground network spans 1662 football fields! After bacteria, they are the most ancient land-based life. According to the latest estimate from mycologist Mary Berbee of the University of British Columbia, they’ve been here for about a billion years, predating the first land plants by at least 500 million years.’

Fungi are masters of survival and collaboration.  An intermediary species known as charophytes possess a unique set of ‘signalling’ genes

This enables them to detect and work with co-operative fungi. Ever since, nearly every land plant has been nurtured by its symbiotic fungi.

The greening of land set in motion a trajectory that led to the richness of life around us. Working with fungi, the first plants changed the atmosphere and sparked the evolution of terrestrial ecosystems with all their plants and animals.

So next time you happen to glance at a button mushroom in the grocery store, pause and reflect: you are gazing at one of the conductors of the symphony of life on land.

If it weren’t for fungi, we wouldn’t be here. 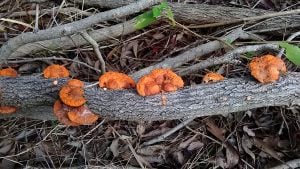 Munibung Hill has at least 25 varieties of fungi.  Just like other life forms they have distinctive characters. Identifying fungi is no easy task, with many and varied colours, shapes and sizes.  The fruit body is what we see on the surface.  Fruit body forms at Munibung Hill include: Agarics, Leathers and Slime moulds (not a true fungi).

Paving over paradise for parking lots is no way to foster a living earth community from the ground (and fungi) up. Unimaginative sterile landscapes of the parking lot kind will never yield the diverse and rich selection of life forms that emerged pre the industrial era.  As we increasingly engage in these paving the planet practices, as survivors and collaborators, if fungi could speak perhaps they would caution their human cousins lest they over step their welcome.

So the next time we buy a bag of mushrooms, remember:

The button mushroom in our local grocery store is a visible outpost of a largely hidden, alien-like kingdom that rules all life on land: fungi.

In spite of our lack of familiarity, it would seem a good time to befriend fungi, far beyond the commercial mushroom kind. Human induced climate change is impacting on fungi, as it is with so many other species we share this earthly home with. But fungi matters, so click on this link: Fungi matter then scroll down to the screen with the words – They connect all life on earth

Read the Cosmos story here: No fungi, no us   Find out more at: Fungi Map

Fifth Kingdom: How fungi made the world

How to grow your own mushrooms:  1 Million Women