What are the factors that bring about a change of heart.  For some it’s a singular light bulb moment.  For others it’s a gradual building of evidence, one thing after another, that results in ‘seeing the light’ as Emma Duncan puts it, in: Why I’ve seen the light on the environment (The Times, June 27th 2019).

“Like many of my generation, I used to regard the green agenda with scepticism but air pollution has changed my mind.”  What’s behind the shift?

Duncan cites a number of factors driving our change of heart when it comes to our relationship with nature.

“I suspect we are seeing a shift in the ‘Overton window’, a notion among political scientists used to describe the range of views that are acceptable at a particular time and in a particular society.  It’s a useful idea, because it indicates what reformers may and may not achieve, but it’s not a new one.  It was best described by Joshua Monk, in Phineas Finn, a parliamentary novel by our greatest political observer Anthony Trollope, in a speech about political reform: 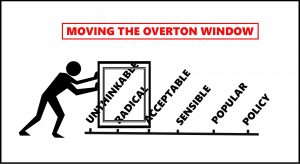 “Many who before regarded legislation on the subject as chimerical, will now fancy that it is only dangerous, or perhaps not more than difficult.  And so in time it will come to be looked on as among the things possible; then among the things probable; and so at last it will be ranged in the list of those few measures which the country requires as being absolutely needed.  That is the way in which public opinion is made.”

The window shifted on race and homosexuality at the end of the last century.  In the 1980s it was just about okay to be racist and homophobic.  By 2000, it wasn’t. And in this century the climate change window has shifted.  “ ….. for politicians to take action things probably need to be settled.  And the fact that a departing Conservative prime minister wants a legally binding zero-emissions target to be part of her legacy suggests that it is,” reports Duncan.

There are three things that are driving the change in attitude and therefore decision-making, notes Duncan.

“First, that the tide of scary environmental stories – about air quality, disappearing species and the melting of the Greenland ice cap – has been rising.  This has been supplemented by positive news, about people like Emily Young, a sculptor who is creating huge heads and dropping them on the seabed to stop trawlers destroying marine life by drag-fishing, and Charles and Isabelle Burrell, whose rewilding of their slice of Sussex has created a haven for nightingales.  We need to be frightened to change our minds, but we need to be encouraged as well.”

“Second, there is a generational shift going on.  My incipient vegetarianism is driven by my daughters, who came back from university armed with greenish views and a lot of recipes involving quinoa.  Because they are now rational beings and are likely to be on the planet longer than I am, I pay some attention to what they think.”

This shift is as much about demographics as it is about young people influencing their parents.

“One of the reasons the window shifts was explained by physicist Max Planck:

‘A new scientific truth does not triumph by convincing its opponents and making them see the light, but rather because its opponents eventually die and a new generation grows up that is familiar with it.’”

“Third, the activists have done a good job.  Extinction Rebellion’s Waterloo Bridge hub was on my commute, so I stopped a couple of times to see what they were up to.  Although there were a certain number of dreadlocks waving in the wind, signalling that their owners belonged to a different tribe to the commuters, the atmosphere was friendly and the activities – speeches, music, discussion groups, free vegan food – inclusive rather than alienating,” writes Duncan.

Values and the tragedy of the horizon