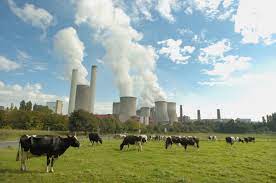 Stuffing up nature doesn’t do anyone any favours, least of all us.  The SOE* report is an account of the way that damage is damaging the humans who’ve done it.

We have carried numerous stories over the years talking up the direct benefits from being in close contact with nature.  Close contact apart from the close contact of eating and drinking and breathing, which of course we take for granted as being associated with nature, but often betraying this by polluting the air we breathe, the water we drink and the processed food we over indulge in – with waste being a massive by-product of the food processing industry.

Responding to the * State of the Environment 2021 report, Ross Gittons concludes that: “… the report reminds us that contact with (healthy) nature is associated with mental health benefits, promotes physical activity and contributes to overall wellbeing. Biodiversity and green and blue spaces in cities are linked to stress reduction and mood improvement, increased respiratory health, and lower rates of depression and blood pressure. Enjoy ’em while they last.”

Having noted that piece of positive information, Ross Gittons in: A damaged environment leads to an unlivable economy (Ross Gittons, 3 August 2022) chronicles the litany of impacts we are engaged in as we operate outside ecological boundaries, denying within the contemporary economic paradigm that they need to be factored in to the national accounting system or GDP.

And goes on to say: “Karl Marx usually gets the credit for saying that, in the economy, “everything’s connected to everything else”. The most conservative economist would agree. The economy is circular because what’s an expense to you, is income to me.

But what applies inside the economy applies equally outside it. Everything inside what we call the economy is connected to everything outside it. What is outside it? The rest of the world – the natural world.”

“When you step back from our daily preoccupations – at the minute, inflation and interest rates – the bigger picture reveals that economic activity – producing and consuming goods and services – mainly involves doing things to the natural environment: we clear the forest to grow food, scar the countryside to mine minerals, which we manufacture into a thousand kinds of machines.

As we get more prosperous, the population grows, our towns and cities get bigger and we clear more forest to build more houses, roads, highways and bridges. We pull more fish from the sea. We move around a lot. And we power it all by digging up fossil fuels and burning them.

As the population’s grown, but more particularly as consumption per person has multiplied, we’ve done more and more damage to the environment.”

Read the full story here: A damaged environment leads to an unlivable economy