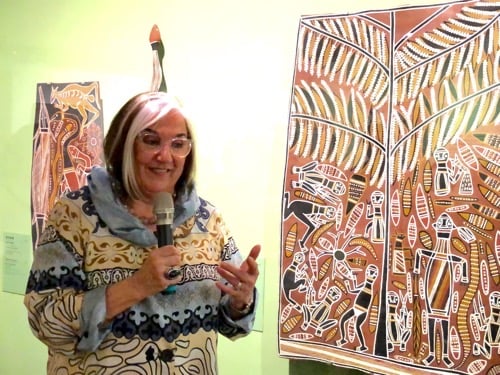 To help better understand and appreciate the importance of indigenous story telling we are posting this collection of extracts selected from: SONGLINES: The Power and Promise, by Margo Neale and Lynne Kelly, Thames & Hudson. 2020.  The book is available at all good bookstores and from many local libraries.

Songlines is the first in the First Knowledges series of six books that will give an in-depth understanding of Indigenous expertise. The second and third books on Design and Country will be published in 2021.

P.9 ..
to learn a foreign language can be daunting, … “my brain simply won’t retain the vocabulary.”

“I started my PhD research when I was in my fifties, looking at Indigenous knowledge of animals.  In one of our first meetings, my supervisor, Professor Susan Martin, suggested that I investigate ‘orality’ and read Walter J.Ong on the topic.  Having never heard the term, I wrote down ‘morality’, wondering if I had already broken with some kind of doctoral etiquette.  I discovered that Ong, author of the influential book Orality and Literacy, was talking about the use of song, story, dance and a raft of other techniques to make information memorable by cultures in the world that did not use a written script.  It was my first baby step to understanding how First Nations people could remember so much stuff. 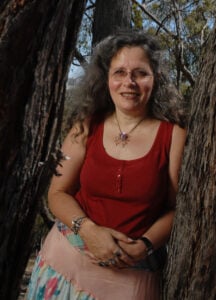 P.15 ..
Everything I was learning started to mesh together.  The geography and history and art of China integrated with the language I was learning.  The birds became part of the environment, not separate entities.  I could see that everything had a place and was named and could be known.  I understood that for Aboriginal people, Country was a network of knowledge on a grand scale, and was amazed that throughout my life I had never been exposed to something so powerful.

Later …
I travelled to Canberra in early 2018 to see the National Museum of Australia’s exhibition Songlines: tracking the Seven Sisters, curated by Senior Indigenous Curator Margo Neale in collaboration with a community curatorium.  The exhibition to me on a journey through the desert lands of many Australian Aboriginal cultures …..

… the stories were told and sung and danced

P.17 ..
My world now is much richer than it was before.  I have lost none of the love I have for books and technology, but now I have a swag of new tools to learn in a different way.  The pragmatic and the mythological, the utilitarian and the emotional, the Indigenous and the Western all meld into a wonderful complex whole.  Now that I have experienced this third archive, I will never stop learning.

P.18 ..
We were taught by missionaries that were to give us a dose of Christianity and ‘smooth the pillow of a dying race’, granting Aboriginal people a passport to the afterlife.  Little did they know that we had already taken care of all that before Christianity, and with passports that never expired or got withdrawn.

We were viewed as a culture without civilization, with no books and no history – only myths and legends to amuse and entertain us around the fire at night ….

The colonisers thought we had no houses and no clothes and were just vagrant wanderers.  Such opinions were likely influenced by explorer William Dampier’s 1697 book: A New Voyage Round the World, and his observation that “The inhabitants of this country are minimalist [sic] people in the world.  Lieutenant James Cook offered a counterview, writing in his journal: “they may appear to some to be the most wretched people upon Earth, but in reality they are far more happier than we Europeans, being wholly [sic] unacquainted not only with the superfluous but the necessary conveniences [sic] so much sought after in Europe, they are happy in not knowing the use of them.

P.35
Ch 1 – Everything starts and finishes with country

Margo Neale
P.37 ..
Aboriginal people were considered primitive natives … and one sin was that Aboriginal people were making no apparent productive use of the land, which provided all the justification necessary for the colonisers to forcibly relieve my ancestors of their land and their sovereign rights.

This view about land use has been rightly challenged by both Aboriginal and non-Aboriginal people.  The works of historian Bill Gammage and Aboriginal Bruce Pascoe have arguably had the most impact here.  Gammage’s book:  The Biggest Estate on Earth: How Aborigines Made Australia (2011) convincingly shows that Aboriginal people did farm the land, but in a different way from the colonisers.  Here were ‘farmers without fences’. Aboriginal people had devised sophisticated, sustainable methods for hunting and gathering through working with nature and harnessing its rhythms.  Using their deep understanding of Country, they worked lightly with the land.

P.39 ..
We need to find ways to bring understanding of Indigenous knowledges into schools and to the general population despite hardships and sensitivities, or they will always remain secondary to the national story. It stands to reason that regardless of people’s views or biases, the Aboriginal story is the foundation story of this continent and thus central to the Australian story.  It has to be fully integrated into the Australian curriculum, and it has to be taught by teachers whether or not they are Indigenous.   When the stories of Ned Kelly and Thunderbolt are taught, for example, so should the stores of Aboriginal freedom fighters Jandamarra and Pemulwuy, who also found themselves outside the law resisting what they believed were oppressive regimes.

Similarly, teaching in the sciences could include Indigenous knowledges in the areas of ecology, geography, geology and astronomy.  Why do we teach Japanese and Italian in schools as second languages, and not Aboriginal languages?

The ways of teaching the humanities and the sciences can only be enriched by Aboriginal ways of learning, in which story, contained in the Songlines, plays an active part.  We need to move into a new space.  We are all Australians – same but different, as us mob say.

Later …
An engaging example of teaching is the National Museum of Australia’s landmark Songlines exhibition.

P.45
Ch 3 – Knowledge in Country and the Third Archive

Margo Neale
Inuit man Dempsey Bob said, ‘The trouble with whitefella is that they keep all their brains in books.’  This simple but perceptive pronouncement invites us to ask, ‘Where else can we keep our brain?’  By brains, of course, Dempsey is essentially referring to knowledge.  Where do we archive the knowledge of a culture for current and future generations if not in books, cloud computing and various electronic platforms?

A clue to the answer lies in those powerful words of Paddy Roe: to dig deeper, beyond the ‘white soil’.  Our history is written in the land – deep in the land – and transmitted via the Songlines.  The deep history of this continent is in that black soil beneath the white soil.  It lies in the millennia before white settlers starting laying down their stories only a couple of hundred years ago, a mere skin that tells northing of the people who were here up to 65,000 years before them.

P.47 ..
in this master archive, humans are documents, archived according to kin, knowledge and ancestral relations to places.  Writer and artist Kim Mahood, noted that they know their Country so intimately they are part of its story.  They don’t need maps.  This was the premise of the exhibition We Don’t Need a Map: A Martu Experience of the Western Desert (2012-13).  As Mahood said:  ‘They are the map, all of them custodians of the interlocking story that is Martu country.’

This kind of entreaty had been heard many times in the preceding years by those working on the Anangu lands.  Elders feared the loss of knowledge as a consequence of the younger generation being distracted by the technological wonders of the 21st century.  ‘They don’t want to hang around with the Elders, they’ve got rap, hip-hop and smartphones’, said elder Lizzie Ellis.  ‘When the young people today are at that young stage, they don’t realise the importance of their culture.’  She said that only when they get older and are ‘married up with kids’ do they want to know their stories, their place and cultural responsibilities.  But by then, the last of the elders who have the knowledge will be gone.

P.61 ..
The anthropologist Alan Ramsey described Aboriginal archiving as an inscriptive and interpretive practice through which ‘Country’ becomes ‘story’.  In other words, the Aboriginal archivist – whom we often know as the artist or maker, both inadequate Western terms – activates the knowledge embedded in a site by carrying some part of that knowledge to the site and carrying away an enhanced experience of that knowledge.  A kind of mutual knowledge transfer occurs between place, person and history.

The number one toy is everywhere at Munibung Hill