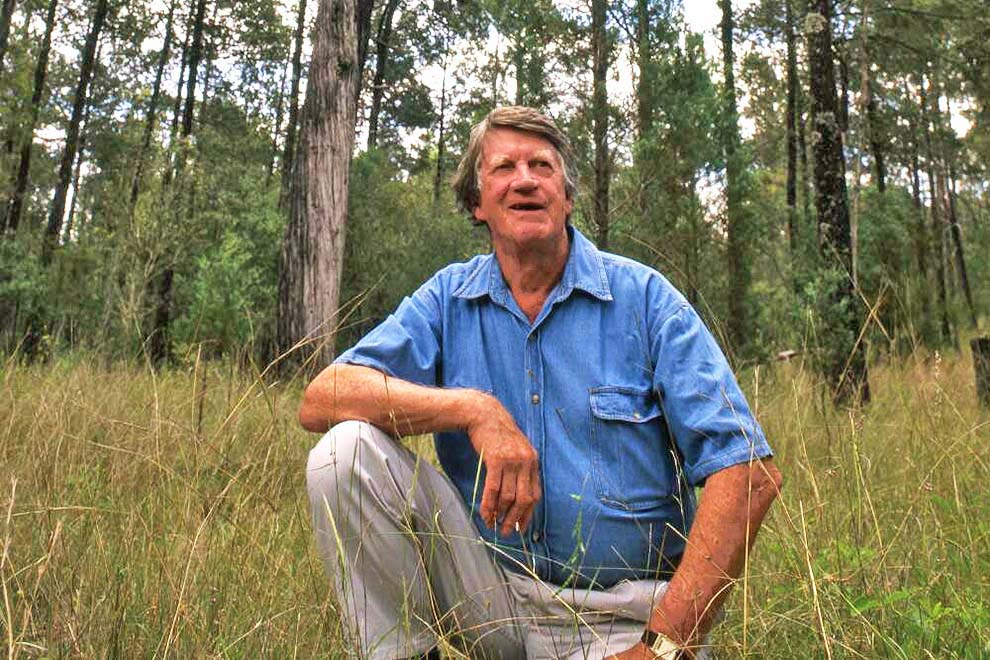 Darryl Jones, Professor of Ecology at Griffith University, Brisbane, refers to Eric Rolls when he writes about the animals that predate on native wildlife, especially birds. Rolls was a guest speaker at one the lectures he attended as a university student.  Rolls didn’t beat about the bush when it came to naming one of the primary causes of native animal extinctions in Australia – domestic cats released in large numbers by settlers and roaming domestic cats today.  What follows is a small extract from the book he wrote and referenced when delivering the lecture attended by Darryl.

In, They All Ran Wild: The animals and plants that plague Australia, by Eric Rolls – Angus & Roberston, 1969, Rolls writes: ‘The first settlers were enthusiastic poisoners. Everything that seemed at all likely to be troublesome was poisoned – the wombat, the rat-kangaroo, the wedge-tailed eagle, any species of hawk, the raven, the dingo, the native cat and the tiger-cat for poultry raiding, and the goanna for egg-eating.  The Aborigines were also nearly all gone. These were mostly shot but many were killed by arsensic-cakes and poisoned flour.  Page 18.

Later …
Domestic cats thrive. No great cat-breeding industry developed but this advertisement (mystifying in its final reference to ‘traps’) appeared in newspapers in 1888:

CATS – CATS – CATS
To the surrounding Squatters requiring
wild or domestic cats to keep down the Rabbit Pest,
I am prepared to supply in any quantities
as I have lately secured 500 traps.
Thomas Nye.  Sutton Forest.

Prices ranged from 1 shilling to 2 shillings and 6 pence.  Thousands were released.  There were plenty of cats near settlements from the earliest days for people have always objected to killing their surplus kittens.  It is still common practice to keep them until they can fend for themselves and then let them go on a stock route or in a State Forest.  The cats turned out for rabbit-eating were not simply shaken from a bag near a burrow and left.  Portable pens were erected in the bush and the old cats were fed there until they had kittens.   The pen was then opened and the feeding gradually reduced so that they would accustom themselves to bush life.

Men who should have known better regarded cats as a complete answer to rabbits.  F.W.Armytage who owned Wooloomanata Estate south of the You Yanga, a range north of Geelong in Victoria, was so pleased with the work of three hundred cats on his 20,000 acres that he told a reporter that he had no more rabbits than he needed to entertain his sporting friends and that he planned to send cats to several stations that he owned in Central Australia.

Four hundred cats in cages arrived by rail in Bourke in 1886. The NSW Government had sent them to be used on Tongo Station on the Paroo, 130 miles south-west of Bourke.

The WA Government was also interested. When an employee by the name of Mason was sent into unknown country to look for rabbits coming out of SA, one of his instructions was, “Endeavour especially to find out if any domestic cats habitate any portion of the rabbit country, and if they attack or live upon the rabbits.” West of Eucla, he found more traces of domestic cats than of rabbits.  When Alex Crawford investigated the rabbits on the Murchison in 1908 he spoke of “enormous numbers” of cats and “cat tracks in every direction”.   A.J.Marshall who went with a Monash University expedition into unsettled country north of the Kimberleys in 1965 found big marsupials in plenty and birds which were rare elsewhere, but few small mammals – “the probable reason for this is the astonishing prevalence of the common domestic cat”.

After myxomatosis almost wiped out the rabbits, foxes and cats must have outnumbered them many times over, yet the rabbits that survived the disease also survived the danger from cats; and a considerable danger it would have been if cats were really as deadly as they were plentiful, since domestic cats gone wild are now everywhere in astonishing numbers. They live on birds, small lizards, mice, and the exquisite little marsupials that the people who “can’t bear to kill dear pussy’s kittens” have never heard of. Most of these marsupials are rare and are seldom seen.   Pages 152 – 154.

Actual and factual, if it weren’t for fungi we wouldn’t be here.