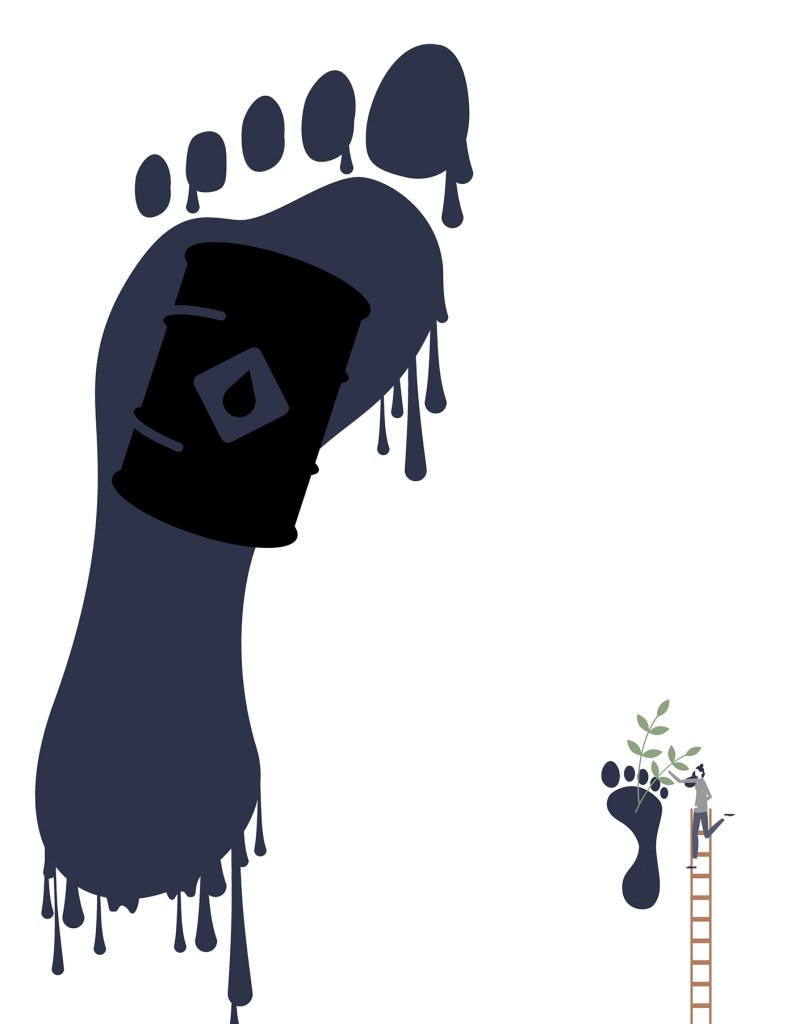 It’s all very well for big business to urge us all to make a bigger effort when it comes to things environmental, but they are shirking their responsibility over and over again. With a few small but highly significant shifts in their practices, to align them with a lot of their rhetoric, we’d all breath much easier with lots less pollution being emitted to the atmosphere and less pressure on the oceans to absorb so much of our ‘wastes’.

Implementing Circular Economy principles such as Right to Repair and Extended Producer Responsibility (EPR) would go a long way to recalibrating the scales in favour of the earth, with people and planet taking priority over short term profits – that come at the expense of mother nature.

Emma Pattee in: The Fallacy of Our Carbon Footprint, Big Oil says citizens should do more to stop climate change (Yes! Magazine, May 10, 2021) says the need for getting our priorities properly ordered as noted above, starts with corporations taking responsibility and not shifting the blame for the problems they create down the chain and onto the end users – us.

Single-use plastics provide a great example of companies shirking their responsibility as the key culprits. It’s not hard, it’s just good housekeeping. Don’t create the problem in the first place, then it’s not necessary to clean up after the event.

Says Pattee:  “ … there are no public campaigns about the fact that packaging, an area where consumer control is limited, is the top driver of plastic production by a significant margin. The emissions impact of plastic manufacturing itself is rarely mentioned, along with the fact that much of our recycling still ends up in landfills. Some of the poorest nations are left to deal with hundreds of thousands of tons of soft drink bottles. The plastics are often just incinerated, creating serious environmental and health consequences.

It’s a question as to whose carbon footprint is making a deeper impact on the environment: the family whose lettuce comes sealed in plastic (and who pays, not only for the product, but also for the waste collection and management services), or the company that is continuing to package food products in plastic materials, and then opting out of responsibility for their disposal.

The reality is that the future of civilization is being decided at a political and corporate level that no individual can impact.

Instead of obsessing over a single metric, Cameron Brick, a social psychologist from the University of Amsterdam, says he urges people to have an ongoing and evolving conversation between themselves and their chosen lifestyle. “It’s not a single number, because anytime you pick a metric, then we will begin to game it,” he says. Instead, a minimal-carbon lifestyle is a process—one that involves community-building and continuing to make improvements over time, he says. “My lifestyle is not perfect either, but probably better each year.”

Hassol points out that one of the most important ways that an individual can impact emissions on a wider scale is also the hardest to calculate: social contagion. “When people do something, it affects others around them and their emissions,” she says.

Studies have shown that energy-related behaviors are heavily influenced by peer groups, even more than cost or convenience. A study in California showed that every time a solar panel was installed within a certain ZIP code, the probability of another installation in that area increased by 0.78%. Similarly, if you know somebody who has given up flying because of climate change, you are 50% more likely to also reduce your own air travel.

When we shift the focus from changing consumer behavior to changing producer behavior, we see where true change happens: in corporate boardrooms and among political leaders. The irony of the carbon footprint is that individual action does have the power to change the world, just not on the lightbulb and recycling level.

“This problem is too big to solve voluntarily one person at a time,” Hassol says. “We need to change the system and you have a role in changing that system.”

Emma Pattee covers topics related to climate change and feminism. Her work has been published in The New York Times, The Cut, WIRED, and others. She lives in Portland, Oregon.

Erica Cirino joins a crew of volunteer researchers going to the Great Pacific Garbage Patch and is surprised not to see the floating dump of human detritus they’d expected.

Before long, one of the sailors, Danish plastic expert Malene Møhl, called the crew’s attention to the waters beneath our ship, which revealed an even more dangerous situation as the sea seemed to shape-shift before our eyes. As the waters calmed, we could see the Garbage Patch was not so much a mass of trash but a soup: the shredded corner of a sun-bleached orange plastic fish crate, a fist-sized chunk of white Styrofoam, a green shampoo bottle, a pink dustpan.

While sailing, the crew dipped trawl nets into the sea, each of which pulled out hundreds of tiny plastic particles: microplastic. The shredded particles created a dense cloud in the Garbage Patch, which circulated in the spinning gyre.

Thanks to the sailors, scientists, environmental justice advocates and activists, and so many others who have chosen to bear witness to the universal harm of plastic and share their stories over the past several decades, the truth is now out. All life-forms—humans, other animals, and the Earth—are beginning to feel the weight of that harm, some more than others. Now, more than any other point in our history is proving to be prime time for course correction.

The first mass-produced plastic, celluloid, used natural organic materials from trees and cotton: camphor and nitrocellulose. It was invented in the late 1800s to bypass inherent limits on materials available in nature—specifically ivory, which was becoming scarcer with every elephant slaughtered. Until then, ivory, tortoiseshell, horn, and other animal parts were used to make popular consumer products, particularly valuable items seen as luxuries, such as jewellery, furniture, and art.

Clearly, recycling is not the solution.

The 1950s mass production boom of petrochemical-based plastic has created to date more than 8.3 billion metric tons of mostly non-recycled material worldwide—in 70 years only 9% has been recycled. This dismal number is not for lack of people trying to recycle plastic, but the result of poorly designed and outdated recycling systems and our inability to recycle certain kinds of plastic.

“Those making and selling plastic have long been narrowing the conversation about plastic waste to litter rather than a wide sweep of all the issues,” says John Hocevar, Greenpeace’s oceans campaign director. “And so plastic industry trade groups’ ads focus on telling us about the end-of-pipe solutions—namely, recycling—rather than how to address the root of the problem, which is making plastic.”

Before plastic came to be widely manufactured and sold, “it was not in the culture to use something once and throw it away,” plastic historian Rebecca Altman, Ph.D., has said. In a piece she wrote on the history of the plastic bag, Altman mentions that a 1950s packaging magazine editor advised industries that “the future of plastics is in the trash can.” As recently as the early 1960s, many people in the U.S. and Europe had milk delivered to their homes in returnable, refillable glass bottles; they carried reusable cloth sacks for groceries; they brought tea towels to hold bread purchased at the baker. Today, we use plastic.

The health consequences from our inadvertent exposure to microplastic particles—through food, drink, and the air we breathe—and the dangerous chemicals they carry are just beginning to be understood.

To seriously address the plastics crisis we must do more than clean up; we must end the demand for plastic: use less, or, ideally, use none. “You wouldn’t just mop up water off your floor if your bathtub were overflowing with water,” says Møhl, the Danish plastic expert. “You’d turn off the tap.” 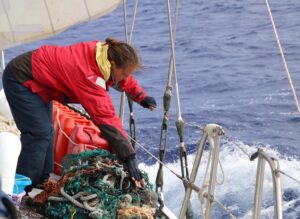 But beyond replacing single-use plastic with single-use compostable alternatives, Møhl and others are advocating for a circular way of thinking to replace our present throwaway culture: Instead of making products to throw them away, we need to start making products we can reuse. These are principles embodied by the zero waste movement, which emerged as an antidote to materialism and mass consumption. Some zero-waste projects that began as a result of the plastic crisis include fix-it cafes, where individuals can access free tools and assistance to repair all manner of items, from clothing to bicycles; and grocery stores where food is sold without packaging.

Former Obama-era EPA administrator Judith Enck says legislation is needed now to support this and other efforts to circularize. Critically, effective legislation must stop new plastic production, particularly of single-use plastic. “If you cannot reuse or recycle it, ban it,” Enck says.

ERICA CIRINO is a science writer and artist who explores the intersection of the human and nonhuman worlds. Erica is author of the book Thicker Than Water: The Quest for Solutions to the Plastic Crisis (forthcoming, fall 2021).

Energy efficiency needs to be a ‘first fuel’ priority

The psychology behind behavior change