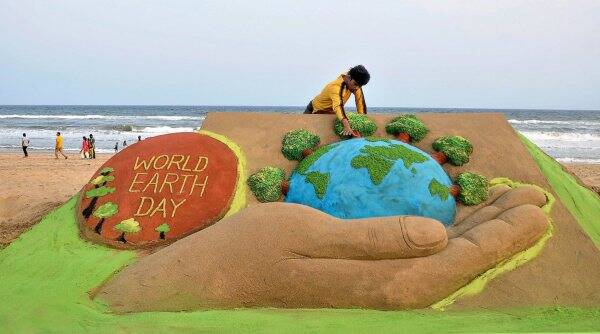 How our biggest threat is us.  How can that be?  It’s not unusual to threaten someone else, but surely one wouldn’t threaten themselves.  It’s seems strange, but it also seems true.

When things look like they’re going belly up, it’s time to take a good hard look at the priorities behind the decisions being made in whatever area of human endeavour under consideration.  This Earth Day, with the theme: Invest in our planet, one of the issues that’s been on the books for many many years is carrying capacity on a finite planet.  A planet that can be described in a couple of words – fragile on the one hand and robust on the other.  We all know what happens when a rural property is overstocked, groundcover is eaten out and it’s a matter of either reducing the herd numbers or importing feedstuffs from outside.  Holistic management principles would have us reduce the herd size, and many practitioners of this framework do just that.  We present three references about human herd numbers here, worthy of consideration.

All environmental problems traced to immense human impact, Paul Collins, The Science Show, 16 April 2022.  The explosion in world population began around 1800 as the industrial revolution gathered pace. The population then was 900 million. One hundred years later it was1,600 million. In 2021 it was 7,900 million. The projection for 2050 is 9,700 million. Paul Collins says all environmental problems are a result of the pressure humans place on the Earth as we change environments, extract resources and produce waste. In his book The Depopulation Imperative, Paul Collins says we need to reduce our numbers, shift our thinking and shift our priorities to Earth first, nature first, biodiversity first. If we don’t, we are condemning all future generations to a world of scarcity, unpredictability, chaos, misery, and ultimately, extinction (about 8 minutes).

This Earth Day, let’s talk about overpopulation. Californians for Population Stabilization, 20 April 2022. At the first Earth Day in 1970, prominent environmentalists across the globe, including Earth Day founder Senator Gaylord Nelson, warned about the environmental threat of overpopulation. Californians for Population Stabilization (CAPS) is launching a nationwide campaign of two video ads to get people talking about this overlooked issue.

Global population is crashing, soaring and moving, Josie Glausiusz, Nature, 4 April 2022.  When we talk population, it’s easy to look disparagingly at countries in Africa and Asia. Or it’s easy to think that the increases are evenly spread.  Of course, it’s a little more complicated than that, as Jennifer D. Sciubba points out in: 8 Billion and Counting: How Sex, Death, and Migration Shape Our World, by , W. W. Norton & Company (2022). With that number of people living on Earth; their futures are highly divergent, argues Sciubba, a senior associate at Washington DC think tank the Center for Strategic and International Studies. The twenty-first century “is less a story about exponential population growth than it is a story about differential growth — marked by a stark divide between the world’s richest and poorest countries”, she writes.

The Earth deserves better than the human species blindly carrying on regardless of the facts as presented by those who have made it one of their prime areas of study.  At the outset we noted it’s important to get ones priorities sorted.  What better way that to pay attention to Paul Collins assessment and then shift out thinking from humans first, to Earth first, nature first and biodiversity first.  This will by extension then loop back to humanity being one of the first beneficiaries. First the Earth, from which all things follow.