What are the trade offs for we humans when it comes to building more and wider roads in response to growing urban densities?  Can we have both safer roads and safer habitat for the native animals that we claim are so important to our ecology and therefore our way of life.

In this habitat research story: Wildlife crossing or roads crossing out wildlife? Christine Donkin    (Wildlife Australia, Summer 2021.   Vol. 58 No. 4), she writes that: As the human population grows and landscapes become more urbanised there is a corresponding increase in road density and traffic volumes. This increased road density and traffic volume brings with it a rapidly growing impact on wildlife and biodiversity. In this article by Christine Donkin, Wildlife Australia considers the zone of impact associated with roads, mitigation measures aimed at reducing wildlife mortality on roads – including an example of escape ramps from Port Macquarie NSW – and considers road network planning in relation to koalas.

The area over which significant ecological effects related to species, soil and water extend out from a road into the surrounding landscape, is known as the road-effect zone. Considering its importance to habitats – and its mortal impact on mammals, reptiles, amphibians, birds, insects and even vegetation – the road-effect zone has attracted remarkably little research in Australia.

Traditionally road engineers have identified the boundary of the road-effect zone as the sum of the road surface and the adjacent road verge.

Over 20 ecological effects of roads have been identified, including alteration in the physical and chemical environment by vehicle exhausts and rubbish, dispersal of weed species, disturbance from vehicular noise, light pollution from headlights and streetlights, increased mortality from vehicle strikes, alteration of wildlife behaviour to avoid these effects, habitat fragmentation, and a greater proportion of edge habitat.  What follows is extracts that provide an overview of road-effect zone research and how the impacts might be minimised … 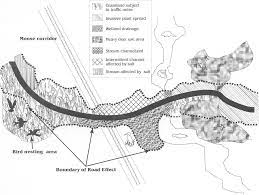 Later …
In their 2005 study, in temperate eucalypt forest in south Victoria, Zoe Peacock and Ruth Lawrence found that the ecological extent of the road-effect zone was many times wider that the road surface and associated verge habitat.

[The road-effect zone can extend from the road into a forest an average of 350m to 380m.]

Later …
What about wildlife mortality on roads?

Over 40 types of road mitigation measures that aim to reduce wildlife mortality on roads were identified [in another study] by Trina Rytwinski and her colleagues in their 2016 meta-analysis.

Later …
Fences reduced roadkill by 54 per cent and crossing structure were not effective unless fences were present. 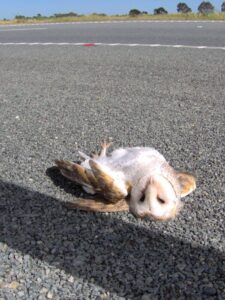 Conclusion
Different species will differ in their response to roads, with some avoiding them altogether and others utilising road verges as important habitat.

Crossing roads has become imperative for some, in an increasingly fragmented landscape.  It has therefore become critical to identify strategies that accommodate increased urbanization and larger human populations, while limiting impacts on biodiversity.

We are the system, we are nature. There is no separation.