There’s an underground movement happening underfoot whenever we step outside into the bush.  We need to pay more heed to this, in many cases microscopic being.

Here we are merrily going about our business, living day by day, getting caught up in the ways of modern industrial society, all the while oblivious to the reality of what’s really going on. Especially what’s going on underground.

All the while thinking that Mother Earth is in need of a good dose of humanity.  But on the contrary, she will dish out to the human kind, what they deserve if they don’t pay attention to the things that matter most.  We need to turn the tables, take a deep breath and offer up a good dose of human kindness in appreciation for the goodness she has shown across the centuries while we’ve been busy behaving as if we are the only species that matters.

There are far more fungi than we can fathom. So let’s take closer look at these amazing creations of Mother Earth courtesy of the literary works of Michael Lim and Yun Shu in their book The Future is Fungi.  There’s a feature story by Michael and Yun in the March-April 2022 edition of Australian Geographic.  We won’t go into much detail here other than to encourage readers to borrow a copy from your local library. 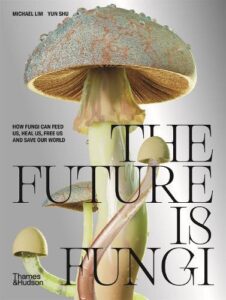 We could do ourselves a favour by appreciating that it’s a fungal world we’re living in, and the sooner we come to understand these magnificent life forms the better off we’ll be. Here are the reasons why …

A single mycelium is so fine that a teaspoon of soil can hold hundreds of kilometres of them. And so an area such as a forest floor can be an elaborate information highway across which fungi and plants constantly relay resources and chemical signals.

It’s widely accepted that the carbon produced by one tree can be shared via its mycorrhizal partners with other trees. This was discovered by Dr Suzanne Simard, a professor of forest ecology at the University of British Columbia, and published in a 1997 paper in Nature. She called it the “wood wide web”. Today, that phrase is used to describe the mycelial highways that facilitate the transfer because they function like a forest’s organic internet.

Plants within the network can use it to transfer sugars, hormones, stress signals and carbon. Suzanne mapped mycorrhizal networks in numerous forests and found they were structured the same way as neural networks in the brain and node links within the internet.

The oldest and largest trees had the most mycorrhizal connections. Suzanne calls them “mother trees”. She believes they are social creatures that support the rest of the network by feeding seedlings and injured or shaded trees, warning others of attacks and transferring their nutrients to neighbouring plants before dying.

Munibung Hill is a fungi friendly place as we would expect.  They are everywhere, mostly obscure or invisible, but nevertheless going about their business, doing what fungi do best: breaking down plant material to enrich the soil and make nutrients available to other plants.  Take care of the fungi when you come across them.  They are often not fruiting for long.  Check the gallery page for some specimens you might come across.    The image at the top of the page shows fruiting bodies – the main part of the plant is hidden away underground consisting of millions of mycelium.  There’s no way we can hope to explain in a short post even a smidgeon of what this and other books on the subject cover.  No wonder so many people who having had no interest in fungi, suddenly come to appreciate the wonders of this underground world.

Living by the laws of the land

Without memory there is no knowledge – the importance of songlines #1