The media is a rich source of information when it comes to expanding our minds about things ecological.  The media is the medium.  It’s actually the program content that we’re interested in, the people who develop new ideas and reveal the results of pain staking research,  This post contains a short selection of authors and program producers – titles we’ve come across over this holiday period.

The first is Paul Downton from Melbourne: A Pattern Language for Urban Nature, 1 December 2020.  Many voices. Greener cities. Better cities.  Says Paul:
1. We are part of nature and we are interdependent with nature. (Feature image at the top illustrates the idea)
2 We think we can be separate from nature. We cannot escape this interdependency. Even when we try, we are tied to living systems by umbilical cords of technology, constrained by natural limits.
3 Human culture is a force of nature.  Our culture is manifest in our actions. Everything we do affects the natural world in some way. We are a force of nature.  In his slim but vital tome published in 2004, Stephen Boyden wrote from a “biohistorical” standpoint about human culture as a force of nature in The Biology of Civilisation and his main conclusion was that “biounderstanding is key to sustaining civilisation and ecological health and the dominant culture must ‘embrace, at its heart, a basic understanding of, and reverence for, nature and the processes of life.”  There are few reasons to be optimistic about the prospects for biounderstanding becoming central to culture, but the need for it is inarguable.
4 Patterns of action
5 Culture and power
6 Patterns that remain

More at this link: Pattern Language

The second is a BBC World Service program presented by Anand Jagatia and featuring the work of Merlin Sheldrake: Is a fungus intelligent?  CrowdScience

As regular listeners may recall, CrowdScience has delved into the strange world of fungi before, as we dug down into the forest floor to reveal how plants and trees are connected to the vast 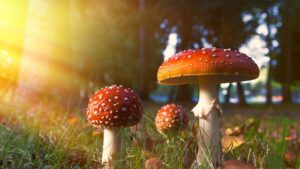 mycelial network known as the “wood wide web”. But what makes this network possible and how might it have evolved? Fungi are incredible clever, or at least , it appears that they’re capable of displaying complex behaviour that gives them the appearance of intelligence. In this episode, we speak to fungal ecologist and author of a new book, Merlin Sheldrake, about fungal “brains”, the evolution of magic mushrooms and zombie insects – the astonishing way certain fungi can take over the bodies of ants and wasps in order to sow their spores above ground.  This program was produced by Rami Tzabar for the BBC World Service.

Listen at this link: Is a fungus intelligent?

The third is a series broadcast on SBS television titled A World of Calm.  Our selection from the 10 part series is:
Series 1 Ep1 – The Coral City
Series 1 Ep3 – The Birds Journey
Series 1 Ep5 – Living among trees

Last but not least as they say is: Life on earth from space.     This is a Discovery channel production – a brilliant summary of how we got to where we are from the beginning of time to the present. It’s a spectacular feature documentary special that presents a fantastic overview of how we got to where we are and the challenges we’ve set ourselves as a consequence of our past actions.  A rare encapsulation of our predicament from an angle that the latest technology is able to facilitate.

Watch the two part program in this one extended version: Life on earth from space

The healing powers of nature

A most important feature of the landscape, says The National Trust