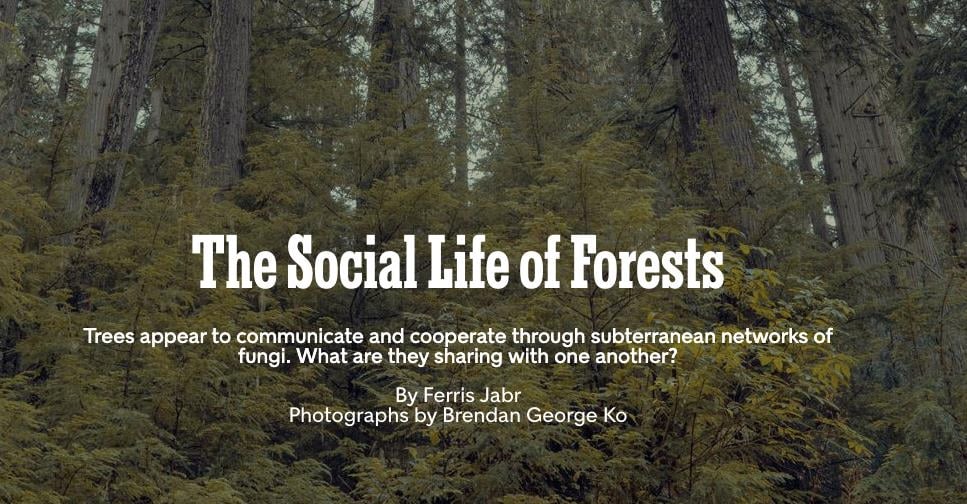 How could it be any other way?  Is it not an cliché to realise that no man is an island, we are all more than skin and bones and a few organs slapped together in some haphazard way?  Some people like to hold on to the idea that we are independent beings able to chart our own course and ride rough shod over whoever and whatever gets in our way. Our role is one of dominance.  One of subduing the earth for our own ends.  Well, hello, where did this kind of thinking get its origins from?

That’s a story for another day.  In: The Social Life of Forests,  Trees appear to communicate and cooperate through subterranean networks of fungi. What are they sharing with one another? Ferris Jabr, with photographs by Brendan George Ko (The New York Times Magazine) reports on the work of Suzanne Simard, Professor of Social Ecology at University of British Columbia, who has been on a quest to understand how trees connect and communicate with each other. There is no end of lessons to be had from this investigation. What follows is some extracts:

As a child, Suzanne Simard often roamed Canada’s old-growth forests with her siblings, building forts from fallen branches, foraging mushrooms and huckleberries and occasionally eating handfuls of dirt (she liked the taste). Her grandfather and uncles, meanwhile, worked nearby as horse loggers, using low-impact methods to selectively harvest cedar, Douglas fir and white pine. They took so few trees that Simard never noticed much of a difference. The forest seemed ageless and infinite, pillared with conifers, jeweled with raindrops and brimming with ferns and fairy bells. She experienced it as “nature in the raw” — a mythic realm, perfect as it was. When she began attending the University of British Columbia, she was elated to discover forestry: an entire field of science devoted to her beloved domain. It seemed like the natural choice.

The question of whether plants possess some form of sentience or agency has a long and fraught history.

The emerging understanding of trees as social creatures has urgent implications for how we manage forests. 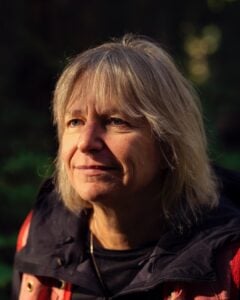 Those gummy white nodules, Simard explained, were mycorrhizal fungi that had colonized the pine’s roots. They were the hubs from which root and fungus cast their intertwined cables through the soil, opening channels for trade and communication, linking individual trees into federations. This was the very fabric of the forest — the foundation of some of the most populous and complex societies on Earth.

Trees have always been symbols of connection. In Mesoamerican mythology, an immense tree grows at the center of the universe, stretching its roots into the underworld and cradling earth and heaven in its trunk and branches. Norse cosmology features a similar tree called Yggdrasil. A popular Japanese Noh drama tells of wedded pines that are eternally bonded despite being separated by a great distance. Even before Darwin, naturalists used treelike diagrams to represent the lineages of different species. Yet for most of recorded history, living trees kept an astonishing secret: Their celebrated connectivity was more than metaphor — it had a material reality. As I knelt beneath that whitebark pine, staring at its root tips, it occurred to me that my whole life I had never really understood what a tree was. At best I’d been aware of just one half of a creature that appeared to be self-contained but was in fact legion — a chimera of bewildering proportions.

We, too, are composite creatures.

Diverse microbial communities inhabit our bodies, modulating our immune systems and helping us digest certain foods. The energy-producing organelles in our cells known as mitochondria were once free-swimming bacteria that were subsumed early in the evolution of multicellular life. Through a process called horizontal gene transfer, fungi, plants and animals — including humans — have continuously exchanged DNA with bacteria and viruses. From its skin, fur or bark right down to its genome, any multicellular creature is an amalgam of other life-forms. Wherever living things emerge, they find one another, mingle and meld.

Five hundred million years ago, as both plants and fungi continued oozing out of the sea and onto land, they encountered wide expanses of barren rock and impoverished soil. Plants could spin sunlight into sugar for energy, but they had trouble extracting mineral nutrients from the earth. Fungi were in the opposite predicament. Had they remained separate, their early attempts at colonization might have faltered or failed. Instead, these two castaways — members of entirely different kingdoms of life — formed an intimate partnership. Together they spread across the continents, transformed rock into rich soil and filled the atmosphere with oxygen.

Eventually, different types of plants and fungi evolved more specialized symbioses. Forests expanded and diversified, both above- and below ground. What one tree produced was no longer confined to itself and its symbiotic partners. Shuttled through buried networks of root and fungus, the water, food and information in a forest began traveling greater distances and in more complex patterns than ever before. Over the eons, through the compounded effects of symbiosis and coevolution, forests developed a kind of circulatory system. Trees and fungi were once small, unacquainted ocean expats, still slick with seawater, searching for new opportunities. Together, they became a collective life form of unprecedented might and magnanimity.

After a few hours of digging up roots and collecting samples, we began to hike back down the valley. In the distance, the granite peaks of the Selkirks bristled with clusters of conifers. A breeze flung the scent of pine toward us. To our right, a furtive squirrel buried something in the dirt and dashed off. Like a seed waiting for the right conditions, a passage from “The Overstory” suddenly sprouted in my consciousness: “There are no individuals. There aren’t even separate species. Everything in the forest is the forest.”

Ferris Jabr is a contributing writer for the magazine. His previous cover story on the evolution of beauty is featured in the latest edition of “The Best American Science and Nature Writing.” He is currently working on his first book, which explores how living creatures have continually transformed Earth throughout its history.

Brendan George Ko is a visual storyteller based in Toronto and Maui who works in photography, video and installation. His first art book, “Moemoea,” about traditional voyaging in the Pacific, will be published next year by Conveyor Editions.

For the full story, click on the link: The Social Life of Forests

Calculating the economic value of nature