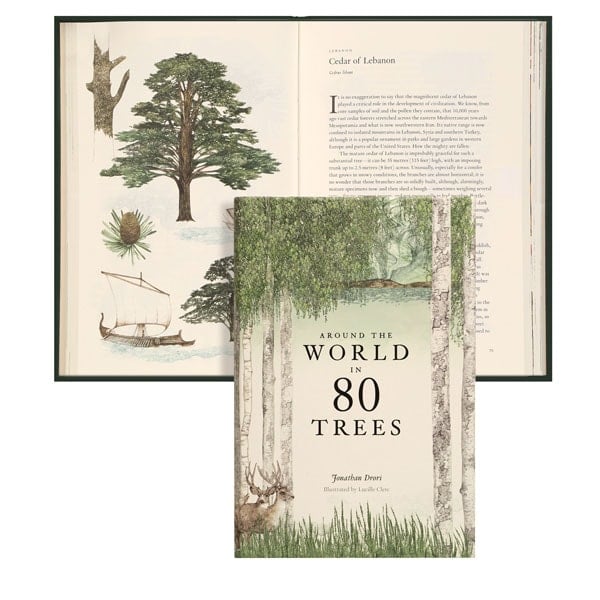 Around the World in Eighty Days was a great film that has inspired many offshoots in terms of the eighty days aspect.

Jonathan Drori’s take on the idea has resulted in Around the World in 80 Trees.

Trees are one of humanity’s most constant and most varied companions. From India’s sacred banyan tree to the fragrant cedar of Lebanon, they offer us sanctuary and inspiration – not to mention the raw materials for everything from aspirin to maple syrup.

In Around the World in 80 Trees, Drori uses plant science to illuminate how trees play a role in every part of human life, from the romantic to the regrettable. Stops on the trip include the lime trees of Berlin’s Unter den Linden boulevard, which intoxicate amorous Germans and hungry bees alike, the swankiest streets in nineteenth-century London, which were paved with Australian eucalyptus wood, and the redwood forests of California, where the secret to the trees’ soaring heights can be found in the properties of the tiniest drops of water. 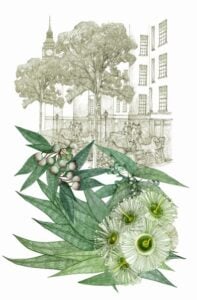 In addition to the eucalypt – Jarrah (book illustration at right) – the other Australian trees featured in the book are the Wollomi Pine and the Blue Quandong.  This is a great way to get an appreciation of how trees contribute to the very substance of our being.

As an extension of this idea, it would be wonderful to produce a walking guide to Munibung Hill based on 20 or 30 trees located across the landscape, from the valleys to the ridges, and across the four hands of the compass – working title Around Munibung Hill in 30 Trees.

Eco house: from dream to reality by Joost Bakker

As a matter of fact, dark matter matters

Children and food and our connection with nature